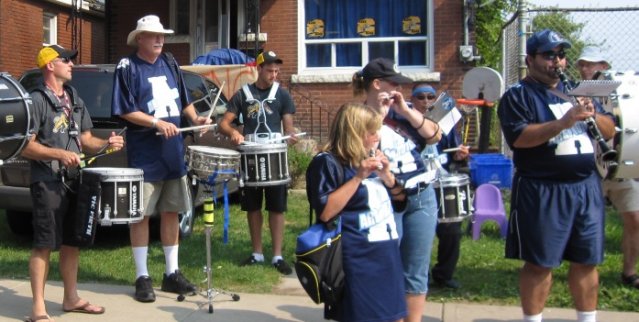 ‘Argonotes’ the Toronto Argonauts Band, has had the pleasure of playing at games in Hamilton a dozen times.  And every time we visit, we have a few goals:

2) See if the band can play a song that somehow causes cheerleader movement.

3) Determine if anybody in Hamilton actually knows the words to their own fight song.

A recording of the Hamilton fight song from the Dal Richards album can be heard here.

Or you can follow along with a songsheet which the Argonotes handed out one year to fans.

=> We love those Cats those Tiger-Cats, the team with the spirit and fight …

It’s not a bad song.  It’s a catchy tune.  It’s even an ORIGINAL tune, unlike, just to pick an example, “On Roughriders” or that “Fight fight fight on, Eskimos” one.  And it’s part of the great CFL tradition, a link to the league’s glorious past, and just the sort of song you’d expect to hear during the tremendous fan day atmosphere at Ivor Wynne Stadium.

Plus we sort of know how to play it.  One of our trumpet players even sang on the original 1968 recording. So if we go to Hamilton and play it, will anybody even recognize it?

2:00 PM Band drifts in to the massive tailgate party at Scott Park, just south of Ivor Wynne. The party is so massive that for the first time in years, parking is sold out two hours before kickoff!  Fortunately I found a spot on someone’s lawn on Melrose Ave, for only $15.  (Well, wait, what do you know, the guy doesn’t seem to have any change, so the price is actually $20, or perhaps, that is the special Argo-fan price.)

2:30 PM Quorum!  We have 30 Argonotes on hand, let’s play something.  We run through a few Argonotes favourites for the large and lively tailgate crowd – the Magnificent Seven; Gimme Some Lovin’; an odd medley of the theme from Superman and Tequila.  Some fans show their enthusiasm by tossing some firecrackers at the band – which is OK, we can use the help on percussion.

2:45 PM Band surrounds a tailgate porta-potty and serenades its occupant with “Taking Care of Business.”

3:00 PM Lets take a lap of the stadium.  We run into some members of the new Tiger-Cats drum line and listen to their impressive beats and intricate rhythms; we suspect they use an ancient musical trick called “rehearsals”, which we really ought to try some time.

3:15 PM We find the entire Tiger-Cats Drum Line and immediately decide to try a joint performance.

3:16 PM Joint performance by Argonotes and the Ticat Drum Line in progress. It would probably sound better if we were all playing the same song, at the same speed, but it’s a glorious noise nonetheless.

3:20 PM Getting in to a long line to enter the stadium, and thinking fondly of how nice it is that at Skydome the band can sort of saunter up to various special secret doors and get ushered right in.  But, hey, this time we bought tickets, and are communing with the Hamilton fans, most of whom are not shy about sharing their opinion of the Argos.

3:59 PM To the delight of all the other fans in Section 28, the band arrives at our favourite spot, Row ZZ, with a fine view of the industrial landscape of Hamilton in the distance (and a view of the Ticat drum line on the other side).  With all due respect to Skydome, this might be my favourite spot to watch a CFL game.  Unless, you know, it’s raining.

4:01 PM Surprise!  Other fans in Section 28 might not be, uh, music lovers.  Lively and spirited discussion of arrival of Argos Band and its potential impact on the game, and suggestions of where the Argos Band should perhaps go, ensues.  But it’s great, we’re all CFL fans, we all love the game.

4:03 PM Band decides – wisely, in retrospect – not to play all the time.  Fans in Section 28 murmur their approval.

4:05 PM Band roars through “Go Argos Go.”  Fans are all yelling something.  I choose to believe they are saying “Encore!  Encore!”

4:10 PM Gregarious Ticat fan in elaborate Ticat hat claims he knows the Ticat song.  Claims his mother was a cheerleader in the 1960s.  Hmm.

4:30 PM I purchase a soft drink.  THEY don’t have any change either.   I am detecting a trend.  Perhaps this is how a new stadium will be financed.

5:00 PM.  Hamilton scores.  Several times.  I forget exactly when, but it happened a lot.  We play the Ticat song to see what happens.  Two things happen.

1) Large group of minor football players in front of the band are apparently not music lovers and express their disapproval with a well known two-word phrase about the Argos.   Little do they know they are criticizing their own song!  Ha! We tricked you!   And not only that, nyah-nyah, YOU have to go to school tomorrow.

2)  Gregarious Ticat fan sings!  He knows the song!  He knows all the words!  The band plays, and he sings out with gusto….

High fives all around! They know!  There are fans in Hamilton that know the Ticat song! And they’re willing to sing it out! Success!

5:30 PM Enjoying the rhythms from the Ticat drum line across the way in Box G.  Great job, guys, welcome to the CFL, you are adding a lot to the atmosphere and I hope you’ll come play at Skydome some time.  (But, ahem, don’t play after the other team breaks their huddle. It’s a rule. Somewhere.)

6:00 PM Game continues. I forget the score. It seems Hamilton may have scored more points than Toronto, despite the best efforts of the band.

7:00 PM Game over. We bid farewell to the music lovers of Section 28, and the big guy who knows the words, and all the other great fans of Hamilton.  We had our victory song ready, but reluctantly played, “Always Look on the Bright Side of Life” at the game’s conclusion instead.

And there is always a bright side. This is a great league, and the fans everywhere are not shy about letting you know what they think of YOUR team, and even if you lose on the road, you’ve shared an experience with other fans of this uniquely Canadian game.

Steve Hayman is the Musical Dictator of the Argonotes, the Toronto Argonauts Band. You can follow him on Twitter at @Shayman.