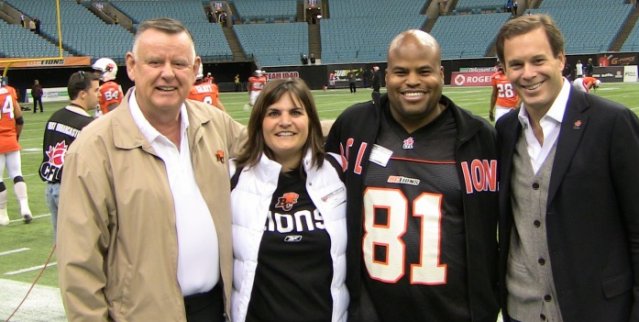 The 2009 CFL football season will go down as a very memorable one for me as a fan. At the beginning of this season I started a quest: I wanted to see a game in each city. Eight games in all. To undertake such a quest I would need a suitable partner in crime. For me, it is my girlfriend Cheryl.

Cheryl and I have now seen seven games. We have gone to Hamilton, Edmonton, Toronto, Winnipeg, Regina and Montreal. This blog is about our most recent trip to Vancouver to see the BC Lions play Calgary.

For those of you who have read my previous blog, or those who come within 10 feet of me, you already know I am a huge BC Lions fan. Four of the seven games we have seen so far have involved the Lions.

As someone who lives in Ottawa I am often asked, “Why do you like BC?” The answer can be traced to my childhood.

The first game I ever went to was in Ottawa with the Roughriders taking on the Lions. At that point I was hooked. Through the years I have cheered myself hoarse for Roy Dewalt, then Matt Dunigan, Doug Flutie and Dave Dickinson. I have watched great defensive players emerge like Brent Johnston, Cam Wake and Korey Banks. I have cheered for Swervin’ Mervin and crossed my fingers for our modern day Superman, Geroy Simon. I held my breath with every Canadian as Lui Passaglia kicked us to a Grey Cup against Baltimore in 1994.

I watched in amazement as BC took a losing Regular Season record in 2000 and still emerged with the Cup. I cried in Ottawa in 2004 as we lost the Grey Cup to Toronto. I stood by proudly as we won the Grey Cup in 2006 and dominated the CFL Awards. From the highs to the lows you can count on me to be there.

I appreciate the fans of the CFL regardless of what team they cheer for, but for me I bleed orange and black. One of the other great aspects of this adventure is how we have been so well received from city to city.

On June 1st of this year when tickets went on sale I parked myself in front of my computer and bought up a seasons worth of tickets. One game I was definitely looking forward to was October 31st. Calgary at BC.  While I have been to Vancouver before to see games, I have never been with Cheryl. That made the trip especially nice. I have to say I am very lucky to have someone in my life that enjoys the game as much as I do.

We arrived in Vancouver on October 29th and stayed until November 2nd. It was a short trip but very enjoyable. I intend to focus this blog on our experiences regarding the Lions and the game but I have to say this season long journey has also become a letter of love to our country.

Canada is such a beautiful place. Many times when we think of going on holidays we head to somewhere warm, or another continent. We have had such an amazing journey this past football season. From having a barbeque on a fan’s front lawn in Regina; to partying with diehard fans in Winnipeg; and experiencing the largest mall in Canada while in Edmonton, this experience has been more than we could have hoped for.

Our Vancouver trip is filled with many great memories but one of my favourites was on the Friday before the game, when Cheryl and I made the short trip from Vancouver to Surrey to the BC Lions head office. Think of a child on Christmas morning getting a toy they have always wanted and you can imagine how excited I was walking into that building.

We took some pictures there and checked out the practice facility. And did I mention the merchandise? Let’s just say I spent a lot over the course of this trip on BC Lions stuff. But I will definitely need that t-shirt, sweatshirt, jacket, mug, thermos, deck of cards, sweater, magnet pad and fuzzy dice (not to mention the gear that Cheryl bought and the Lions souvenirs that our family will be getting for Christmas).

The BC Lions were very kind to invite us to go down to field level before the game and watch the warm-up. On the 31st we arrived at the stadium about an hour and a half before the game started. One of the BC Lions employees, a wonderfully kind person named Natalie, looked after us. She was very patient as we must have asked her a hundred questions. We had the opportunity to meet Jamie Taras. Jamie, if you didn’t know, is a CFL Legend. The cool thing about meeting a CFL Legend though is he is as down to earth as the person next door.

So there we were. At BC Place. On field level. About 10 feet away from the players warming up. Could it get any better? Oh yes.

Jamie came over to Cheryl and me and asked us to walk with him. He took us to the sidelines and introduced us to David Braley, the owner of the BC Lions, and Mark Cohon, the Commissioner of our League. Both gentlemen were extremely friendly and I would be lying if I didn’t confess I was a little nervous. The owner of the team I have idolized since I was a child and Mr. Cohon is arguably the best Commissioner this league has seen in recent memory. I was in football heaven.

We spoke to Mr. Cohon for sometime as Mr. Braley was very involved the pre game preparations. We spoke about expansion and how great the 2009 season was shaping up.

At no time did we feel we were bothering Mr. Cohon. He had a sincere interest in talking to us and he was very genuine.

KICKOFF UNDER THE DOME

In regards to the game itself, BC lost when Calgary kicked a field goal with only seconds to spare (we had a brief glimmer of hope when the field goal was called back, only to have Calgary score again).  The game itself was a seesaw battle between two very good teams. While I was sad that BC lost such a close game, Cheryl and I were still overcome with excitement from our pregame experience.

The BC Lions have had recent trouble with Calgary. You can’t really say that Calgary has dominated the Lions on the field but they always seem to come up with the win. The funny thing is the Lions seem to be peaking right now although it may not seem like it as they have lost two games in a row.  At the time I am writing this BC is preparing to play Edmonton and hopefully book their ticket to the playoffs. I am confident BC will not only be in the playoffs but will be in the Western Final and dare I say it, but the Grey Cup.

After the game we headed to the Shark Club. This bar is the staple for the post BC game celebration. On this night it wasn’t much of a celebration but a lot of the players were there. We met up with Natalie and had a chance to hang out with her some more.

I found that a lot of the patrons were very nice to me. It didn’t take me long to realize they thought I was a player. Did they not see my belly? ‘Tough loss, don’t worry you’ll get them next time.’ “You guys were robbed.’ Before I could correct them they were gone. A flattering thought but my place is in the stands, or maybe in the head office… just putting it out there!

Cheryl and I spent the next few days visiting the Vancouver Aq
uarium and going to see a Canucks game. We went shopping on Robson Street and came across a few people that stared at us. Oh yes, I was wearing my BC jacket. We stopped in to grab a bite at a restaurant where the greeters were convinced I was a player. “Really, I’m not” was my typical reply. “Ok, I won’t tell anyone” they would say to me with a wink.

While Vancouver is fully immersed in Olympic fever, we are forever immersed in BC Lions fever. I can’t wait for the game against Edmonton. I can’t wait to see how the 2009 playoffs unfold. This is the best time of year.

I may not play for the Lions but they are my adopted family.

I have always been a huge supporter of our league. I have said it before and I will say it again; if it takes you four down you are doing something wrong.

Seven games down, one to go. See you in Calgary at the Grey Cup!

Keith Whittier grew up in Ottawa, but considers himself a B.C. Lions fan. He posts on Twitter as @cfl_fan.