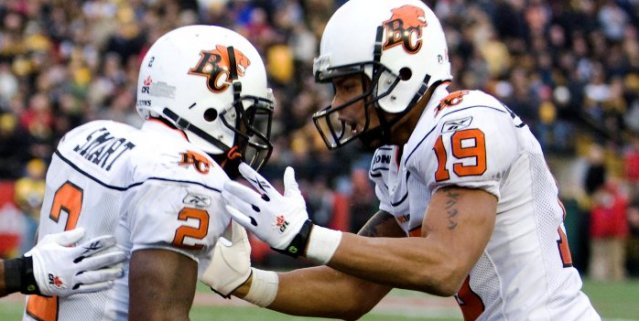 HAMILTON, Ont. — Casey Printers spoiled the party for the Hamilton Tiger-Cats on Sunday.

Printers hit Ian Smart on an eight-yard TD pass to earn the B.C. Lions to a dramatic 34-27 overtime win over the Ticats in the East semifinal Sunday.

Printers, who played despite injuring his thumb in the regular-season ending loss to Edmonton that left B.C. fourth in the West, found Smart on the Lions’ second play in the extra session following a 27-yard Martell Mallett run. The Lions’ defence prevented Hamilton from scoring, handing the Ticats a bitter defeat in their first home playoff game since 2001 and first playoff appearance in five seasons.

Printers, the fourth different quarterback to win for B.C. this season, finished 24-of-35 passing for 360 yards and also rushed for a touchdown in his return to Ivor Wynne Stadium, flashing the form that made him the CFL’s outstanding player in ’04 with the Lions. The enthusiastic crowd of 27,430 — just over 2,000 short of a sellout — soundly booed Printers, remembering the miserable two seasons he spent here before the Ticats released him following the ’08 campaign. Printers only returned to the CFL last month and earned his first win in four starts since rejoining the Lions.

“I’m so cool with that,” Printers said of being portrayed as Public Enemy No. 1 in Steeltown. “To be honest with you, man, I’m so thankful for Hamilton.

Hamilton forced overtime in dramatic fashion with Kevin Glenn hitting Dave Stala on a nine-yard TD strike. Then he found a wide-open Marquay McDaniel on the two-point convert to make it 27-27 at 14:38 of the fourth.

After a slow start, Glenn almost single-handedly rallied the Ticats to a stirring playoff win. He finished 31-of-51 passing for 437 yards and two TDs and said Hamilton was simply outplayed.

“In the second half we got a bead on what they were doing and made some plays,” Glenn said. “But they came out and made more plays than we did.

“It’s tough. It’s a hard pill to swallow right now because of the opportunity we had.”

But the Ticats mounted the comeback almost in spite of themselves. They had just eight rushing attempts for 36 yards against a Lions’ defence that allowed a CFL-high 138 yards rushing per game. Tailback DeAndra’ Cobb, who had run for 267 yards in the two regular-season meetings between the two teams — which Hamilton won — had just seven carries for 34 yards.

“We called a lot of runs but they forced us to pull the ball and get on the edge with it and they put extra people in the box,” he said. “That was OK because we knew we could throw against them.

“We still scored 27 points in regulation and on most days that’s enough.”

Hamilton came in having won three straight whereas B.C. finished the regular season losing three straight. The Lions got the crossover playoff berth only after the Ticats beat Winnipeg 39-17 to clinch second in the East and eliminate the Bombers from post-season contention.

Printers was masterful in leading B.C. on two long scoring marches from inside their 10-yard line that not only resulted in 10 points for the Lions, but prevented Hamilton from getting the ball in good field position and kept the Ticats’ defence on the turf for long stretches. He was also very effective throwing the ball away whenever pressured despite being sacked four times.

“He showed glimpses of the ’04 Casey,” said Ticats linebacker Otis Floyd, a former teammate of Printers with B.C. “He got out of the pocket and when he did he hurt us.

“Glenn, I thought, brought his team back while Casey kept his composure,” Buono said. “He didn’t let things get him down.

“We’ve been a team of resilience. This is the 12th game out of 13 that we’ve either won or lost in the last minute of the game so this is nothing new for us. I told the players that I believe we’re playoff ready because we’ve been playing playoff football since Sept. 1.”

Still, Hamilton tied it 16-16 on Glenn’s 28-yard TD pass to Dave Stala, who made a brilliant diving catch at 9:05 of the third for his second TD of the game. It came after the Ticats had to settle for a field goal at 4:24 after a Chris Thompson fumble recovery and return to the Lions’ 20-yard line.

B.C. countered with Rolly Lambala’s one-yard TD run at 12:14, set up by a 34-yard pass interference call on Hamilton’s Jykine Bradley. Then Printers took the Lions on an 11-play, 71-yard drive that culminated in a 33-yard Paul McCallum field goal that put the visitors ahead 26-16 at 3:05 of the fourth

“When Casey took off up inside, we had three or four different times where he was all wrapped up and he didn’t go to the ground,” Bellefeuille said. “He stood up and made plays and I thought he did a good job of throwing the ball away in situations.”

B.C. will face the Montreal Alouettes in the East Division semifinal Nov. 22 at Olympic Stadium. The winner will represent the conference in the Grey Cup at Calgary’s McMahon Stadium on Nov. 29

NOTES — Quarterbacks Buck Pierce and Zac Champion were among B.C.’s scratches while receiver Prechae Rodriguez didn’t suit up for Hamilton . . . The playoff intensity was evident in the pre-game ceremony as Lion linebacker JuJuan Armour and Floyd got into a brief scuffle while Lions receiver Paris Jackson and Ticats defensive back Bo Smith — also a former Lion — could be seen screaming at each other . . . Lions safety Barron Miles finished the regular season with a CFL-high eight interceptions, registering six over his final six contests . . . B.C. ended the regular season with three straight losses for just the fourth time in club history and the second time in 30 years.