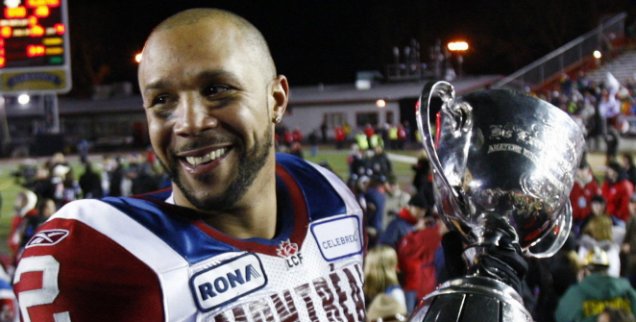 Toronto — It was a GREY CUP classic and now it’s a GREY CUP record.  More Canadians watched the GREY CUP last night on TSN and RDS than ever before. Preliminary overnight data from BBM Canada confirms that 6.1 million viewers watched last night’s thrilling CFL championship game – making it the most-watched GREY CUP ever* as well as the most-watched telecast of the year in Canada**.

More than 14 million Canadians, or nearly 43% of the country’s population, watched the game in whole or in part. An incredible 8.35 million viewers were watching the broadcast at 9:49 p.m. ET on TSN and RDS as Montreal kicker Damon Duval converted his second game-winning field-goal attempt as timed expired.

The combined TSN and RDS audience for 2009 GREY CUP surpasses the previous combined Grey Cup audience high of 5.2 million set in 2002 by 16%.

TSN’s GREY CUP audience of 5.087 million becomes the highest audience ever recorded for the network, surpassing the 2009 IIHF World Junior Championship Gold Medal game that attracted 3.7 million viewers on TSN earlier this year. RDS’ French broadcast attracted over one million viewers. The broadcast on RDS surpassed all conventional television audiences on a competitive Sunday night in the French market.

The GREY CUP on TSN becomes the most-watched telecast on Canadian television this year – ahead of both THE 81ST ANNUAL ACADEMY AWARDS® and SUPER BOWL XLIII**.

“An incredible audience for what was an absolutely incredible game. We are obviously thrilled that so many Canadians joined us for what will go down as one of the most dramatic Grey Cups of all time,” says Phil King, President of TSN. “We are incredibly proud of our CFL broadcast team – last night and throughout the whole season – they captured all of the drama and emotion that makes the CFL so special.”

“What a way to end the season, and unbelievable game with more Canadians watching than ever before. The Grey Cup is truly a national celebration and its wonderful so many of our fans across the country joined us for one of the most remarkable games in CFL history,” said Mark Cohon, Commissioner of the CFL.  “Our league offers its congratulations to our partner TSN on a truly outstanding broadcast, and our thanks to our fans across Canada for their tremendous support.”

Online, TSN.ca attracted more than 2.9 million page views on Grey Cup Sunday. More than 5,000 people viewed TSN’s Grey Cup blog from CFL analyst Duane Forde. The Grey Cup blog attracted users from all over the world including from such far away places as China and Chile.

The Grey Cup is available on-demand on TSN.ca and will soon be available in the iTunes store for fans who want to purchase a copy.

Final audience numbers for the 2009 GREY CUP will be available in the coming weeks.

*Since television meter measurement was introduced in 1989
**Audiences prior to August 31, 2009 based on BBM Nielsen Media Research Mark II meters
*** Omniture