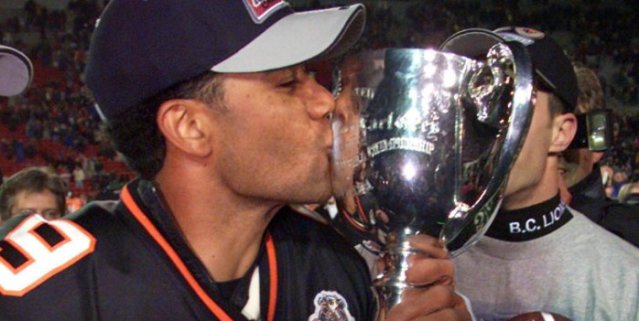 CALGARY — The history of the Grey Cup is dotted with upstart teams that have losing records in the regular season only to make a dramatic bid for the CFL championship before succumbing in the final.

B.C. Lions’ kicker Lui Passaglia hit a fourth quarter field goal which represented the winning points in the 88th Grey Cup game. He retired from the CFL after the game as the CFL’s all-time leading scorer.

The 2000 B.C. Lions showed signs of being one of these teams. Forced to deal with a head coaching change in mid-season, the Lions finished with an 8-10 record and won three out of their last four just to make the post-season. Momentum was on their side, as the Lions took playoff games in Edmonton and Calgary to earn their trip to the Grey Cup.

The Lions faced an Alouettes team who, despite great win-loss records since their return to Montreal in 1996, had underachieved in the playoffs. The Als were making their first appearance in the Grey Cup since 1979.

B.C. reached the end zone first when quarterback Damon Allen scored on a one-yard run midway through the first quarter. The Lions took a 12-3 lead into halftime.

The Alouettes showed signs of life in the third quarter when Jock Climie scored on a one-yard pass by Anthony Calvillo. Montreal trailed 12-10 after 45 minutes.

The Lions restored their nine-point lead early in the fourth quarter when Robert Drummond broke off a 44-yard run for a touchdown. Following a Montreal field goal, Allen called his own number again for a one-yard major. But B.C. failed on an attempted two-point convert.

Trailing 25-13, the Alouettes set up a dramatic finish when Mike Pringle scored on a five-yard run. But with 1:25 remaining in regulation, Lui Passaglia ended his 25-yard career on a championship note, kicking a 29-yard field goal for B.C.’s winning points. Passaglia missed three out of his first four field goal opportunities in the first half.

The Alouettes still had some fight left in them. With 44 seconds remaining, Anthony Calvillo found Ben Cahoon for a 59-yard touchdown. Needing a two-point conversion to tie the game, Calvillo had Thomas Haskins in his sights but could not make the connection, as B.C. held on for the win.

B.C.’s ground attack proved to be unstoppable, as Drummond rushed for 122 yards. Sean Millington fell one yard short of 100, while Allen chipped in 39. As a team, the Lions had a total of 260 rushing yards.

With the victory, the Lions became the first team in history to win the Grey Cup after posting a losing record in the regular season.