A twist on the CFL’s overtime rules 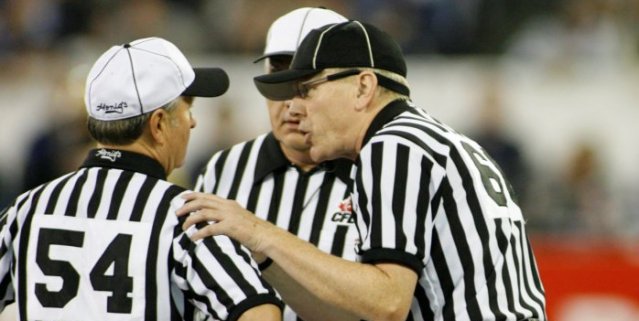 A twist on the CFL’s overtime rules

ENOCH, Alta. — The Canadian Football League may be about to inject even more suspense into its popular “shootout” overtime format.

The league’s rules committee is recommending that teams that score a touchdown in overtime be required to go for a two-point convert by running or passing the ball into the end zone instead of kicking for a single point.

The proposal goes to the league’s Board of Governors, which has the final say, later this Spring.

“The rules committee decided that the two point convert will make an exciting approach to overtime even more exciting, with a pass or run with the game potentially on the line replacing a kick that has become relatively routine,” said Tom Higgins, the CFL’s Director of Officiating.

“What’s also exciting is the committee has again listened to our fans, and heeded their advice.”

One year ago, CFL Commissioner Mark Cohon took the unprecedented step of asking fans for their proposed rules changes, something that led to a change in field position following a safety.

This year, Cohon issued the call to fans on behalf of the league again, but he asked them to pay particular attention to whether the league’s overtime format could be improved.

Fans sent in more than 2,000 rules suggestions with three-quarters of them focused on overtime.

The vast majority said they preferred keeping the league’s overtime format, which has teams take turns scrimmaging from their opponent’s 35-yard-line, instead of changing to a different format, such as two five-minute halves or some other sort of “mini-game”. But many suggested various tweaks to the format.

In the end, the rules committee agreed the format should not be changed and decided that the best “tweak” is requiring two-point converts in overtime.

Under the current rules, if the score is tied at the end of a game, each team gets an opportunity to scrimmage from its opponent’s 35-yard-line, until it makes a score or loses possession.

If the score remains tied, the procedure is repeated at the opposite end of the stadium.

If the score is still tied after each team has had two attempts, the game is declared a tie, if it’s a regular season game. If the game is a playoff or championship game, the same procedure continues until a winner is finally decided.

The rules committee met here, just outside Edmonton, as part of CFL Congress, an annual meeting of league and team personnel that wraps up tomorrow with the Coach of the Year luncheon.

It is recommending another change which would allow a team that gives up a field goal (during regulation time) the option of scrimmaging from its 35-yard line instead of receiving a kick-off.

The committee decided to suggest changing the current rule, which requires a kick-off after a made field goal.

The rules committee is also recommending no penalty for pass interference be applied if a forward pass is deemed uncatchable.

It is also proposing that, when a ball is punted, hits the ground and hits a player from the covering team, the resulting penalty be reduced from fifteen to five yards.

“I want to thank our fans for their passion and ideas, and our rules committee for taking their input into consideration,” Cohon said.

“While our Board has the final say, it speaks to the bond between our league and our supporters that our fans have an important say.”