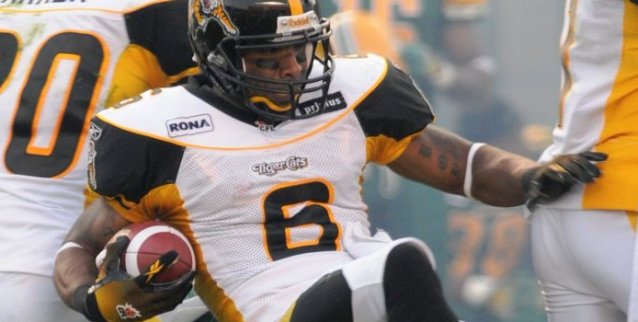 Balogh, a 6-6, 303-pound native of Fort Benning, Georgia played four seasons at the University of Montana where he earned first-team All-Big Sky Conference honours.  Balogh was a member of the NFL’s Chicago Bears practice squad in 2008 and was among the team’s final cuts during training camp last year.

Mayle, a 6-1, 175-pound native of Phillipi, West Virginia caught 107 passes for 1,847 yards and 11 touchdowns in four seasons at Ohio University.  After finishing his collegiate career, Mayle joined the practice squads of the NFL’s Buffalo Bills and Kansas City Chiefs.

McDaniel, a 6-0, 185-pound native of Virginia Beach, Virginia registered 34 receptions for 705 yards and five touchdowns in two seasons at Hampton after transferring from Florida State.  He is the brother of Ticats receiver Marquay McDaniel.

Thornton, a 5-10, 180-pound native of Belle Glade, Florida attended training camp with the Edmonton Eskimos last season.  He caught 48 passes for 923 yards and 10 touchdowns at Texas A&M-Commerce in 2008.