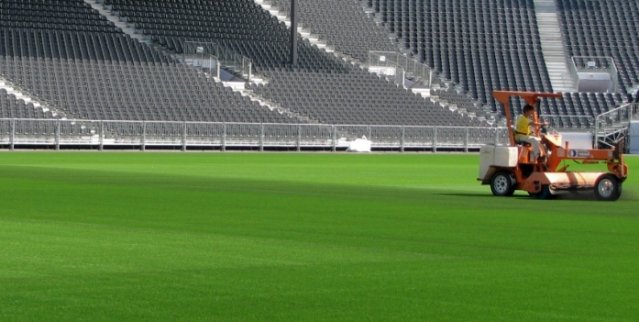 The BC Lions held an open house for their season ticket holders on Sunday and the early reviews are in. Football is going to be a lot of fun this season.

When you walk into Empire Field, you have to be pretty impressed at what has been constructed there in such a short period of time. The stadium is going to provide an up close and personal view of the game for football fans this season, which will put them right on top of the action. The side line seating is similar to the look of the original stadium with its column supported roof. The seats along the sidelines and in the corners are a black molded plastic seat while the end zones are bench style aluminum seating. The seats are completely filled in so there is no danger of dropping your wallet into the scaffolding maze under the seats.

The replay screen sits in the north end zone. It’s fairly small and the picture didn’t look that great and it also may get washed out in the sun at certain times of the day. There are two scoreboard style clocks that show the time, down, and score that are in opposite corners that should be visible to all fans.

The real surprise was the presence of a new field turf playing surface. Original plans had called for the turf from BC Place to be used, but it’s clear this surface is new by the colour of it. The surface looks great but if you’re hoping for the advertising free field we’ve enjoyed at BC Place, word is this surface will be painted up with sponsorship. Hopefully they can find room for a Lions logo as well.

Cons? Well washroom lineups could be long as only 150 portable toilets are on the site, in addition to washroom trailers. There will also only be three concessions maximum on the east side of the stadium, and the ticket person I talked to said they still didn’t know the exact locations.

Overall, I was very impressed with the facility and what they were able to do in such a short period of time. Many football fans in BC will be getting their first outdoor game experience and on a day like today, it’s hard to imagine them not thoroughly enjoying themselves.

Brian Wawryshyn is a B.C. Lions fan who runs the fansite www.bclionsden.ca and posts on Twitter as @BCLionsDen. You can find him on CFL fan forums as Orangeshoes99. The name comes from his favorite player growing up, defensive lineman Nick “Orange Shoes” Hebeler.