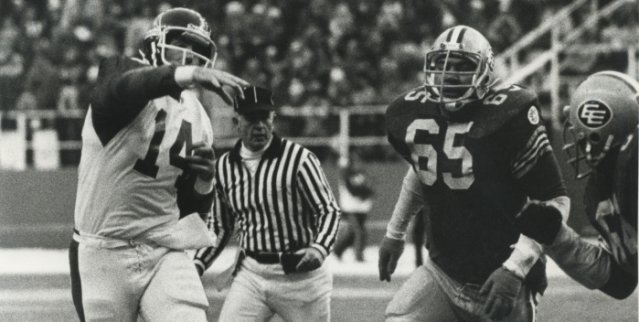 If an athlete’s legacy can be measured by how well he performs in championship games, few rank higher on the scale than former Montreal Alouettes quarterback Sonny Wade.

The Alouettes won three Grey Cups in the 1970s. The Most Valuable Player in each of those victories was the Martinsville, Virginia native and graduate of Emory and Henry College who was picked 236th in the 1969 NFL draft.

Jesse “Sonny” Wade (1969-78) won his first of three awards as he launched the decade with a Montreal victory over Calgary in the 1970 Grey Cup. He won again in 1974 and 1977. Wade was generally regarded as an average QB during the regular season but when it mattered most, in the Grey Cup, he always delivered.

In 1970 he threw a 10 yard touchdown strike to Gary Lefebvre in the fourth quarter to secure a 23 -10 victory over Calgary.

In 1974 Wade connected on 10 of 25 passes for 139 yards in Vancouver as Montreal beat Edmonton 20-7. Neither team could mount much of an offence on a soggy Empire Stadium field but Wade did just enough to lead the Als to victory.

In the ’77 Grey Cup, the infamous “Ice Bowl”, Wade was at his best as he completed 22 of 40 passes for 340 yards and three majors on a bitterly cold day in Montreal. All three of his touchdown tosses came in the second half as the Als rode rough-shod over Edmonton 41-6.

“Probably 1970 was the most memorable because we weren’t expected to be in the game,” says Wade. “We had finished third that year. We were really young and just went out there and won the game. “

“In ’77 we were probably two touchdown underdogs. My wife, my parents and friends from high school came up for the game. In fact my wife told me the morning of the game that she had a dream that we were going to win 41-3. We had a storm come through and I think they put some chemicals on the field to melt the ice but it ended up making it harder. We put staples on the bottom of our shoes with a staple gun. I don’t know if it did any good or not but it did seem as though we had better traction.

“We had an awful good team though in ’77. Defensive Backs Randy Rhino and Dickie Harris were as good as any that ever played in the CFL. Dalla Riva had the best hands of anybody I ever saw. He never missed it no matter how hard I threw it.”

Wade’s biggest Grey Cup disappointment came in the ’75 game. “We missed a 19-yard field goal on the final play of the game against Edmonton,” he says. “We were playing in Calgary and that would have won it.”

Instead the Als lost by a single point 9-8.

Wade was drafted by the Philadelphia Eagles in 1969. ”At the time I was on Montreal’s negotiation list and they got in contact with me,” he says.

“There was almost no difference between what they offered me and what Philadelphia offered. The Eagles were going through a lot of changes so I decided to go to Montreal.”

In his ten year career Wade completed 1083 passes for 15,014 yards. He threw 89 touchdown passes and is in third place on the Alouettes all-time passing list in all three categories. He was also an excellent punter and is the Als career leader with 852.

“I was way more consistent as a punter than I was as a quarterback,” Wade says with a laugh. “I was known to be a little erratic at quarterback sometimes.”

“We didn’t have a very good team in 1969 but 1970 really started the turnaround for the fan base towards the Alouettes,” he says. “The opening of Olympic Stadium also added a lot of fan interest. Montreal was a wonderful city.”

“I don’t want to miss anybody but I played with some great guys,” he says. “Peter Dalla Riva, Larry Smith, Moses Denson, a real good football player, Glen Weir, a great player, Gordon Judges, Tony Proudfoot, Mike Widger, he didn’t look the part but he could hit.”

Following his glory days with the Als, Wade attended a training camp with the Eagles until tearing ligaments in his foot.

He returned to his Virginia roots and worked in sales and marketing in the clothing industry for many years prior to retiring in his early 50s. Today he keeps busy hunting, fishing and trapping. He also coached his sons in softball and baseball and helped out with the local high school football team.

Now 63, Wade lives in Axton, Virginia, just east of his hometown of Martinsville. He and his wife Gayle have three sons: Danny who played football at William and Mary, Jess who played at North Carolina State, and Greg who is attending medical school at The Virginia Commonwealth University School of Medicine.

“Overall the league was trying to come into its own,” the former Als star says of his time in the CFL, “and I think that a lot of the players there helped the league become what it is today. If you play a professional sport anywhere for 10 years you are going to have some good times and some bad times. For the most part they were great times.”