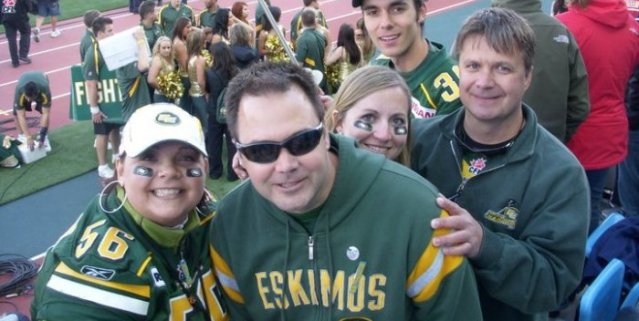 The many years that I have been a CFL fan I never dreamed that I would be in Atlantic Canada taking in a game.

When Scotiabank Touchdown Atlantic was first announced I knew I had to be there regardless of what teams would be playing. It was a great bonus to have my Eskimos taking on the hometown Moncton (Toronto) Argonauts.

Practicing with the Eskimos

Shamus, a young fan in P.E.I. hits the pads with Esks Kyle Koch and Patrick Kabongo

Myself and about 15 friends made the trip east to take in some of the sights and most of all enjoy the mini Grey Cup atmosphere.

I started to get the Touchdown Atlantic fever on the Tuesday in Cornwall, PEI. The Eskimos were running a football clinic for minor football. I walked into the Terry Fox Complex chose my seat in the bleachers and was immediately greeted by a young man by the name of Shamus. Shamus was at the football clinic to watch his big brother practice with the Edmonton Eskimo offensive linemen.

I could sense Shamus’ excitement waiting to meet CFL players for the first time in his life. He told me and my friends of the many teams in PEI and his dreams to play for them too. The football clinic began and Shamus took a spot on the bleachers right next to our group. He pointed out his brother who was now suited up and taking instruction from Patrick Kabongo.

Before I knew it Shamus had left his spot next to us and we had lost sight of him. I looked over to the offensive linemen drills and Shamus was right in the middle of the drill hitting pads with Kyle Koch. He didn’t waste a minute getting into the action; it looked as if a new football fan had been born along with a dream of playing in the CFL.

Thursday was the day we made our way into Moncton, my friend Angie and I were going to be volunteering at the CFL Alumni Golf Tournament. The event was held at the Royal Oaks Golf Course and was put together by Jan Carinci (Argo Alumnus) and a team of volunteers.

It was exciting for me to meet the many CFL Alumni including Leo Ezerins, Bruce Beaton, Peter Martin, Adam Rita, and many, many more. After registration I was sent to assist at the putting green where Scotiabank was raising funds for minor football.

CFL Commissioner Mark Cohon lines up a putt at the Alumni Golf Tournament at the Royal Oaks Golf Course in Moncton.

The first team to take on our challenge was the Commissioner’s team. Lucky for minor football no one sunk their putts and no money had to be paid out as winnings.  In total $1400 was raised for minor football that day and Scotiabank matched every dollar!

My favourite moment of the day though was visiting with the Grey Cup and chatting with Mark DeNobile(executive director of the Canadian Football Hall of Fame) who quized me on my CFL knowledge and filled my head with some neat CFL facts.

Friday the fan parties began, first stop was the Argos headquarters in the Old Triangle Pub. We had to make sure Argo fans knew the Esks had good support there too. I had the fortune to meet many Argo fans and get in a little good spirited trash talking.

The remainder of the evening was spent at the Spirit of Edmonton. SOE had erected a tent in downtown Moncton, where I saw many familiar faces from every year at Grey Cup.

Walking the downtown streets of Moncton you saw the colours of every CFL team. It definitely had the feel of a Grey Cup. My highlight of Saturday was running into a few Eskimo players outside of the Argos headquarters, we began chanting Let’s Go Eskimos! The players embraced the enthusiasm they were encountering, by jumping and hollering their way down the street.  We were definitely getting pumped for the game on Sunday.

Game Day!  Moncton’s facility could rival some present CFL stadiums.  The crowd was electrified and when the CF18 flew over to start the game everyone went nuts.  Watching my Esks play in such a monumental game was at times overwhelming; I was watching history unfold before my eyes! I was so glad I was there to experience a great day in CFL history.  I look forward to doing it again Moncton…