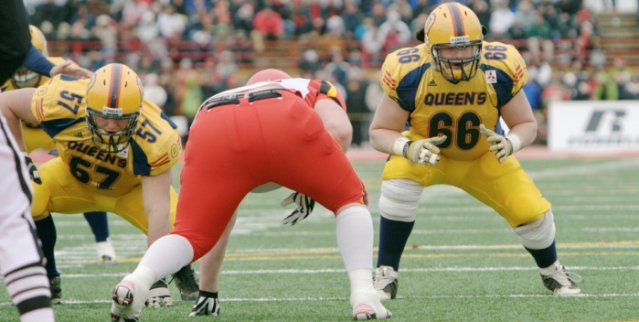 Running back Nick FitzGibbon (Puslinch, Ont.) of the Guelph Gryphons was named a First-Team All-Star after being first in OUA for rushing yards with 804. Western’s Jerimy Hipperson (St. Catharines, Ont.) was the leagues other running back to be named to the First-Team after scoring 11 regular season touchdowns on the ground this season. Kick returner Dillon Heap (Waterloo, Ont.) who made the CIS record books for kick return yardage last season also made the list.

Protecting the quarterback doesn’t go without recognition. Guards Matt Norman (Chateauguay, Que.) of Western and Patrick D’Amico (Montreal, Que.) of Ottawa were named First-Team All-Stars for their efforts in backing up their QB’s. On the offensive line, big men Matt O’Donnell (Kingston, Ont.) of the Queen’s Gaels and Josh Buttrill (Barrie, Ont.) of the Mustangs got First-Team honours. McMaster Marauder Justin Glover (Hamilton, Ont.) was named the First-Team All-Star at centre.

Rounding out the First-Team offensive All-Stars are place kicker Matthew Falvo (Welland, Ont.), who came up big for the Gee-Gees on a number of occasions this year and punter Darryl Wheeler (Hamilton, Ont.), of the Western Mustangs who averaged 41.62 yards per punt in 2010.

The Western Mustangs had the best defence in the league all regular season and it doesn’t come as a surprise that they took home five defensive First-Team All-Star awards. Craig Butler (London, Ont.) was not only named a First-Team All-Star for the halfback position, but also for his work at rush/cover. Other Mustangs on the list include defensive tackle Mike Van Praet (London, Ont.), defensive end Zander Robinson (Vancouver, B.C.), and linebacker John Surla (Niagara Falls, Ont.).

Inside receiver Heap of the Hawks was also named to the Second-Team for his receiving efforts. The other inside receiver named a Second-Team All-Star was Devan Sheahan (Kingston, Ont.) of the Queen’s Gaels. Wide receivers Jedd Gardner (Niagara Falls, Ont.) of the Gryphons and Shamawd Chambers (Markham, Ont.) from Laurier were also on the list. Marauder Joey Nemet (Burlington, Ont.) rushed for 572 yards this season and got the All-Star nod at the running back position. Fellow running back Jimmy Therrien (Montreal, Que.) of the Queen’s Gaels was also named to the Second-Team.

Place kicker Dan Village (Abbotsford, B.C.) made the offensive Second-Team All-Star list. Village broke the Queen’s school record for points in a season with 271. Windsor Lancers punter Robert Eeuwes (Burlington, Ont.) also made the list coming second in average yards per punt with 39.87. Butler from the Mustangs got his third All-Star award on the season as a kick returner for the Second-Team.

OUA all-stars were selected by the nine football head coaches across OUA. The major OUA football award winners will be honoured in Hamilton, Ont. on Thursday, Nov. 11 at 11:30 a.m.