Fan Blog: From a kid’s point of view 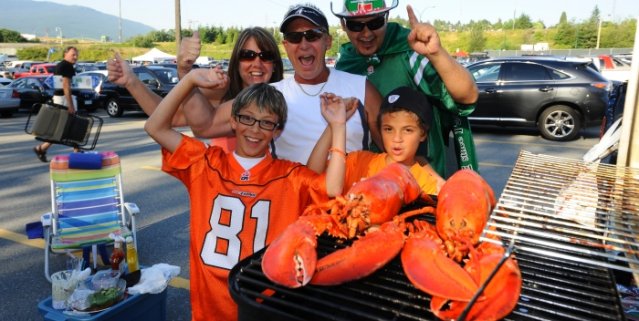 Fan Blog: From a kid’s point of view

The boy whispered to his aunt, “There is football in there.”

The boy’s aunt looked at the excited child confused. “Excuse me?” she asked.

The three-year-old repeated, “There is football in there!!! And Lulay!!!!” as he pointed to Empire Field.

The Aunt in question was my friend Natalie and the boy was her best friend’s son Cashton. She was taking Cashton and his mother to a B.C. Lions game earlier this season.

It’s unclear what Cashton meant by, “There is football in there” – Was it the actual football or did he mean that a game was about to start? At the end of the day it really doesn’t matter.

We’ll get back to the young boy and the “football in there” in a second.

I am a huge BC Lions fan and this season has seen a lot of ups and downs for my team. I have to confess though, I have to started looking at things from a child’s eyes.

Because they don’t care about wins or losses. They are just excited to be there.

Now I am realistic. I know the CFL is a business and I know the teams want to win. Hey, I’d love for BC to go 18-0 and then coast to the Grey Cup but is it realistic? In a season that saw the team start 1-7 I was sad.

I don’t think Cashton cares about their record though. He’s just excited about the opportunity to see the Lions play.

I came across three children this season who, indirectly, really inspired me and even though I don’t know all of their names, I would love to share the experience. The first boy I just mentioned.

The second boy I encountered at a B.C. Lions walkthrough at their facility in Surrey. I went out to watch the team practice and I came across a very excitable young man.”‘My sister is being born this weekend!!!!” he exclaimed for all to hear as we gathered waiting for the team to come onto the practice field.  His Dad explained that the young man was a huge fan and that a new addition to the family was imminent.  Father and son had been too many games and the young man usually dressed in a Lions costume. Well a cub, as the father had his own costume.

As the team exited the locker room and came onto the field some stopped to hi-five the youngster.

“How you doing little man?”

“My sister is being born this weekend!!!”

The players seemed confused by the response but what wasn’t confusing was the young man’s enthusiasm. I can’t say this young man, who was about four, was too involved in the practice but he sure was excited when it came time to get autographs.

The third boy I encountered was at Empire Field. My friend Natalie, an employee of the Lions, had provided me with access to the field before the Lions final home game of the season to watch the warm up from the sidelines.  As I was there I noticed the referee getting warmed up. Then he came to the sidelines and got a young boy who turned out to be the Scotiabank Kid Captain! Now if you don’t know about the Kid Captain then let me tell you because this is a great gig!

The child, between the ages of 7-14, gets four tickets to the game. They get to stand on the sidelines holding the team flag during the national anthem. And the Kid Captain gets to attend the coin toss. The coin toss!!! So the referee came and took the Kid Captain on to the field to watch the warm up. This young man’s heart must have been beating so loudly as he watched the Lions defensive line warm up in the end zone while he stood less than 10 feet away. One by one the D-Line came over and shook the young man’s hand.  I remember being a child and my mother taking me, my brother and my cousins to an Ottawa Rough Riders autograph day and the players seemed larger than life. What an amazing experience. I’m not going to lie; as I watched this kid get excited I found myself tearing up as it reminded me of time with my mother and I was excited for this kid.

Now back to Cashton, the three-year-old who I spoke of earlier. Natalie told me that her nephew was very excited about being at the stadium as he loved the Lions especially Travis Lulay. She had once asked him about Casey Printers. “Oh, I don’t like him Auntie.”

At the stadium his face was pressed up against the fence as he watched the players warm up. He watched in amazement and admiration. Then, Natalie tells me, the Felions (BC’s cheerleaders) came onto the field. She checked in on Cashton.

The young man was in heaven.

I miss the days when life was that simple. I think it’s easy to get caught up in wins and losses and forget about all of the hard work these players do off the field. Not just the Lions, but all eight teams. I am proud of the way most of our players conduct themselves on and off the field.

So many of these players give up their time to go to schools, community centres, etc to help out the youth in their area.

I wanted to take a moment to recognize their hard work from the eyes of people who don’t care about trophies or rings, but just about the game. Well the game and that their sister is being born this weekend.

I am excited for the playoffs. I have my Grey Cup tickets ready to go. I will stand outside of Commonwealth Stadium on November 28th excited for the game, no matter who is playing. You know why? Because there will be football in there, and hopefully Lulay, and I will definitely be having two hot dogs for dinner!