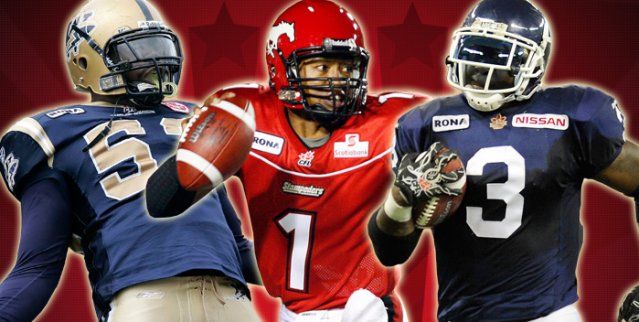 Leading the 2010 squad is Calgary quarterback Henry Burris who threw a CFL best 38 touchdowns as his Stampeders finished with a league best 13-5 record this season.

The Stampeders had a league best eight players named to the 2010 team.

Hamilton and Montreal each had three players chosen to the team. Hamilton’s All-Stars include Gibson’s Finest Defensive Player of the Year nominee Markeith Knowlton, while Montreal’s selections include guard Scott Flory who earns his eighth All-Star nod.

Saskatchewan’s Andy Fantuz was one of two Roughriders chosen to the team after leading the CFL with 1,380 receiving yards this season.

B.C. also had two selections to the team including the league’s oldest player, Paul McCallum, who was named the league’s All-Star kicker.

Defensive back Chris Thompson was the only Eskimo selected to the squad rounding out the 2010 CFL All-Stars.

The FRC voting panel consists of representation from each CFL market and a national chapter. In total, 53 members of the FRC voted for this year’s all-stars.

Fans were given the opportunity to have their voice heard through the CFL All-Star Balloting Program presented by The Vancouver Province, Calgary Herald, Edmonton Journal, Leader-Post, The StarPhoenix, National Post and the Montreal Gazette. Nearly half a million votes were cast by CFL fans across the country.

“Thanks to all of our fans, coaches and media who helped us recognize our great players by voting for this year’s all-stars,” said CFL Commissioner Mark Cohon. “Congratulations to all of our all-stars and good luck to those who are up for outstanding player awards next week in Edmonton.”

All-Stars are selected by a combination of fan balloting, CFL head coaches and Football Reporters of Canada. Fans do not vote for most outstanding player awards.

The 2010 Gibson’s Finest CFL Player Awards will be handed out in Edmonton on Thursday, November 25.