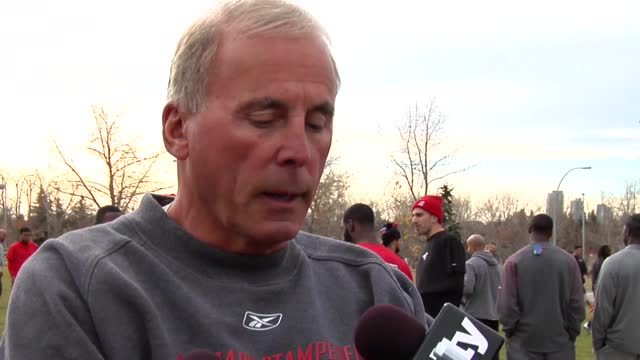 EDMONTON — The honour is fitting even if the winners of the award couldn’t all fit on stage.

“This award is for everyone who has ever worn a watermelon instead of a toque to a CFL game,” CFL Commissioner Mark Cohon said in making the announcement during the Gibson’s Finest CFL Player Awards.

“Each year, I have the privilege of handing out the Commissioner’s Award to a person or group that has made an outstanding contribution to the development of Canadian football,” he said.

“This year, the one hundredth year of the Saskatchewan Roughriders, I decided to pay tribute to a group that epitomizes the way CFL fans love our league: the Rider Nation, which collectively does so much to make our league vibrant and strong and fun.”

While every team in the CFL has tremendous fans, Saskatchewan fans are known for filling stadiums for their team’s road games as well as home games, making the Riders the league’s best draw. They are responsible for more than half of the CFL’s merchandise sales. And their team’s games are routinely among the most watched on TSN.

“I really believe our league is home to some of the best fans in the world, including passionate supporters of the Lions, Stamps, Eskimos, Bombers, Cats, Argos and Alouettes,” Cohon said.

“But few would dispute, especially in the Roughriders’ centennial year, that there is something special about Rider Pride.”

The award was accepted on behalf of the Rider Nation by three generations of a family of devoted Saskatchewan fans: Randy Goulden of Yorkton, Saskatchewan, a Rider shareholder and a season’s ticket holder since 1979, her son Tom Goulden, 35, her grandson Jonathan McLeod,  8, and granddaughters Kathryn Goulden-Maddin, 14, and Calen Goulden, 9, and Amarah Goulden, 7.