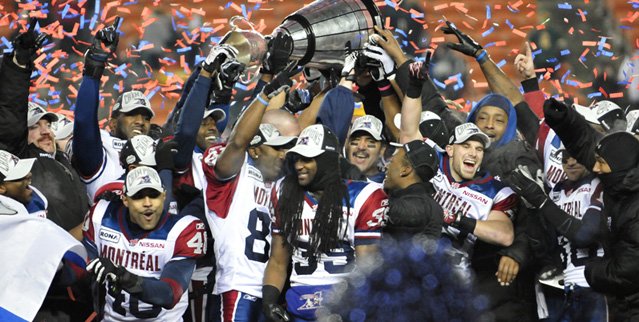 EDMONTON — No stranger making big plays in big games, Jamel Richardson came through when the Montreal Alouettes needed him the most.

Richardson’s 37-yard reception set up the second of Avon Cobourne’s two touchdown runs as Montreal earned a compelling 21-18 win over the Saskatchewan Roughriders on Sunday, their second straight Grey Cup win over the West Division champions.

Richardson was named the game MVP after registering eight catches for 109 yards. But in a contest devoid of offensive outbursts, no play was bigger than Richrad’s crucial reception that Montreal at Saskatchewan’s two-yard line, from where Cobourne scored to put the Als ahead 21-11 at 7:14 of the fourth.

“When they called my number I said, ‘It’s about time,’” said Richardson, who has reached the 100-yard plateau in three straight Grey Cup finals. “But this wasn’t about me, it was about the guys in the locker-room and I did it for them.

“We just wanted to get it done for a couple of players that might not be coming back.”

Quarterback Anthony Calvillo finished 29-of-42 passing for 336 yards then dropped a bombshell regarding his CFL future. The 17-year veteran said afterwards he will have surgery soon to have a lesion in his throat removed.

Calvillo says doctors found the lesion after he was hurt against Winnipeg earlier this year. Biopsy results on whether it was cancerous were inconclusive but doctors felt he could finish the season.

And veteran slotback Ben Cahoon will again ponder retirement in the off-season.

Richardson and the Alouettes came into the game with a huge chip on their shoulders. Earlier in the week, safety Etienne Boulay made headlines by suggesting the CFL wanted the Roughriders to win the Grey Cup and subsequently put Saskatchewan into the better hotel here.

“We wanted to come here and prove everyone wrong,” Richardson said. “They said it couldn’t be done but we fought and got the job done.”

But not without plenty of late drama for the sellout Commonwealth Stadium gathering of 63,317 _ an Edmonton Grey Cup record and fifth largest in the game’s history that was dominated by Rider green.

Montreal kicker Damon Duval missed a 41-yard field goal try that Saskatchewan returned to its 16-yard line with roughly a minute and a half remaining and trailing by just three points.

It was Duval who missed from 43 yards on the final play last year to seemingly give Saskatchewan a 27-26 victory. But the Riders were called for too many men, and Duval made good on his second attempt from 33 yards out to give Montreal an improbable 28-27 victory.

And on Sunday the Riders made it interesting when Darian Durant’s one-yard TD pass to Marc Parenteau at 11:52 of the fourth cut Montreal’s lead to 21-18. It came after a 31-yard reception by Andy Fantuz to put the Riders’ on the Alouettes’ one-yard line.

Montreal countered by driving to the Saskatchewan 33-yard line, only to have Duval miss and give the Riders another chance. But Alouettes defensive back Billy Parker cemented the victory, intercepting Durant’s desperate toss at the Saskatchewan 37-yard line with under 56 seconds remaining for the game’s lone turnover.

It was a fitting end for Parker, who the Riders felt was the weak link of Montreal’s secondary. Saskatchewan consistently threw the ball his way, but he was often up to the task and made some solid plays for a rugged Alouettes defence that held the Riders to 298 total yards.

“We moved the ball in big spurts but we didn’t do anything consistently,” said Riders coach Ken Miller. “And we weren’t able to get them stopped consistently with our defence.”

Prime Minister Stephen Harper and Governor General David Johnston were among those in attendance. Harper paid a visit to the Alouettes’ locker-room after the game to congratulate the champions.

“On behalf of Canadians from coast to coast to coast, I would like to congratulate the Montreal Alouettes for demonstrating the grittiness and toughness necessary to become the winner of the coveted Grey Cup,” harper said in a statement.

“For the 98th time, the best football players from across this country have battled for the honour and glory of becoming Grey Cup Champions. Today the Montreal Alouettes inscribe their names on the cup for the seventh time.”

Saskatchewan was able to get solid pressure on Calvillo in the first half by mixing up their blitzes and coming for different directions. But the Alouettes were able to counteract that in the second half by having Calvillo get rid of the ball quickly with short, accurate passes to receivers who were often able to be the Riders’ man coverage. As a result the Alouettes dominated time of possession, controlling the ball for 36 19

Meanwhile, the Alouettes neutralized one of Saskatchewan’s most dangerous weapons. Durant was 18-of-31 for 215 yards, one touchdown and the key interception. More importantly, the CFL’s leading rushing quarterback was held to just one carry for eight yards.

And there’s something about playing in the Grey Cup that definitely agrees with Richardson, who surpassed the 100-yard receiving plateau for the third straight CFL title game.

“I love the attention,” Richardson said. “When the lights are out, that’s when your stars come out.

“Whenever your team looks to you, you have to make plays.”

The Grey Cup game was in stark contrast to the regular-season series between the two teams. Saskatchewan won a thrilling double overtime 54-51 contest July 1 before Montreal took a 30-26 decision in August.

But on Sunday, it was the defences that took centre stage, especially Montreal’s, which forced Saskatchewan at one point to punt on eight straight possessions.

“Every game takes on its own unusual storylines and could go many different ways,” said Montreal head coach Marc Trestman. “We played the game as it came to us and tried to do the things that we prepared to do.

“We just were able to sustain and get enough big plays to try and keep the ball out of their offence’s hands. Our defence really stepped up tonight.”

Montreal, which despite posting the CFL’s second-best record (12-6) was just a 3 1/2 favourite over the Riders (10-8, second in West Division). The Alouettes were making their third straight Grey Cup appearance under head coach Marc Trestman, who became the first consecutive Grey Cup winner since Don Matthews of Toronto (1996-’97).

Saskatchewan was in the title game for the third time since 2007. And while that includes these back-to-back losses, Miller was happy with the fight Saskatchewan showed on Sunday.

“For me it’s not quite as tough because last year we had the game won, and then lost it. This was a hard-fought game and given another minute or two or three we might have won the game,” said Miller, who again said he will ponder his future as coach in the off-season.

Duval, who also missed from 31 yards out in the first half, connected from 43 yards out just 1:37 into the fourth to give the Alouettes a 14-11 lead.

Following an entertaining half-time performance by Bachman & Turner, Montreal took its opening march of the second half 83 yards on 14 plays _ including a successful fake punt with Duval’s 22-yard field goal at 9:26 making it 11-11.

NOTES – The 50-50 draw for Sunday’s game was worth a whopping $127,229 . . . Bachman & Turner made their first Grey Cup appearance but Randy Bachman played at the 2000 Grey Cup in Calgary as a member of The Guess Who . . . The Alouettes beat the Eskimos 25-16 in 2002 when the Grey Cup was last held here . . . Saskatchewan lost defensive back Leron Mitchell to a fractured left leg in the first. The former Western Mustang missed 14 months recovering from a broken leg suffered July 4, 2008 against the B.C. Lions . . . Juno nominee Down With Webster was the pre-game entertainment . . . Calvillo, Cahoon and offensive lineman Scott Flory were
the only three players to have appeared in all eight of Montreal’s Grey Cup appearances since 2000 . . . Referee Bud Steen worked the final game of his 30-year career Sunday. Steen appeared in his 510th career contest and seventh Grey Cup . . . Fantuz, who became the first Canadian to lead the CFL in receiving this year since ’95, had two first-half catches for 19 yards after registering just two receptions for 11 yards in Saskatchewan’s first two playoff contests.