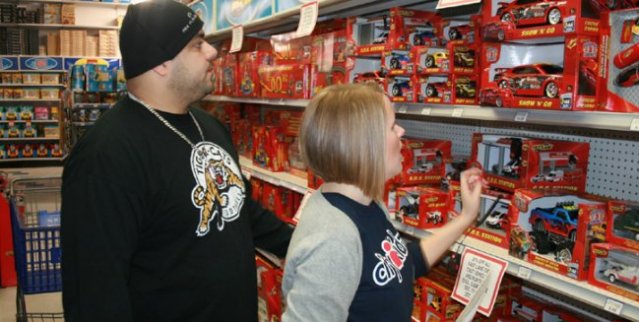 HAMILTON — At Christmas time, most children expect a large, jolly man in a red suit and white beard to shimmy down their chimney and leave gifts in the middle of the night.  However, for about 150 kids in Hamilton’s east end on Saturday afternoon, the man bearing gifts was a 291-pound Lebanese offensive lineman who entered through their front door.

Ticats offensive lineman Marwan Hage teamed up with City Kidz, an organization that aims to transform the lives of inner city children, for the first ever Hage’s Heroes Christmas Toy Drive.

Marwan didn’t just lend his name to the effort and stand back while others did the heavy lifting.  The CFL All-Star was hands-on throughout the weekend, from purchasing and wrapping gifts on Friday to personally distributing the presents at each family’s door on Saturday.   This was more than a simple community appearance; it was a two-day experience.

“Everything we do at City Kidz is intentional, so hand-picking these gifts is a very intentional thing we’re doing.  We tell the kids that we care about them and then show that we listened, heard what they wanted and then deliver a gift that’s more than just a toy.  It’s the love behind the gift that is going to be given this Christmas,” said Susan Lamont, Director of Development for City Kidz.

Hage was presented with the CFL’s Tom Pate Award in 2009 in recognition of his contributions to the community.  He has hosted food drives at Thanksgiving and Easter, welcomed thousands of local youth to Ticats home games and made numerous donations to Hamilton charities, but this marked the first time he played Santa.

“We’re always looking to grow the Hage’s Heroes program and we made it a priority to do something at Christmas this year.  Christmas should be a time of happiness for everyone, especially kids.  I’m happy that we are able to help out some of these families in need at this time of year,” said Hage.

The toy drive began on Friday morning, when Hage and a handful of volunteers from City Kidz and the Ticats office descended upon Toys R Us to purchase toys that had been requested in advance by the kids.  Funds for the toy drive were generated by the Marwan Hage Celebrity Charity Dinner and Poker Event in October.  Some additional toys and cash were donated by Toys R Us customers when they learned what Hage was shopping for.

“(The donations) were unexpected, but very much appreciated.  When people at the store found out what we were doing, they were buying extra toys and donating them to the cause.   One lady walked up and gave us $100 in cash.  That was incredible,” said Hage.

The most impactful phase of the toy drive came on Saturday, when Hage and volunteers visited the homes of the children to hand deliver their presents.

“To have a Tiger-Cat actually come to their home and deliver a present, that goes beyond words.  It can’t get better than that,” said Lamont.