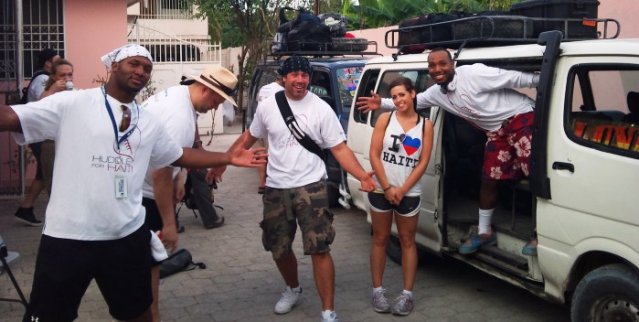 The fourth-year CFL player has gained a much better appreciation of the life he has in Canada and a deeper understanding that there are many who have it worse than him. A lot worse, in fact.

Lumbala, 25, is among a group of seven CFL players who participated in Huddle for Haiti, a 10-day humanitarian effort that assisted with reconstruction efforts a year after a devastating earthquake hit the country in January 2010.

Kelly Bates, Aaron Fiacconi and Graeme Bell of the Edmonton Eskimos, Yvenson Bernard and Chris Cvetkovic of the Winnipeg Blue Bombers and Jason Jimenez of the Hamilton Tiger-Cats also participated in the project, which was scheduled to end Saturday with the players leaving Haiti to return to their respective homes.

“I’m so embarrassed about some of the things I’ve complained about,” Lumbala said during a telephone interview from Haiti. “When you think about how much water I’ve wasted while taking a shower or how much food I’ve wasted . . .

“Coming here is such a humbling experience. We’re so spoiled and in a way so self-minded in Canada. I mean, we complain when the Internet is slow and yet these people are happy because they have power for three hours. They have such an appreciation for life here, such a joy for life that it truly is amazing.”

Bernard has roots in Haiti and after the earthquake spent six weeks there assisting his family and its community in its rebuilding efforts. His family hosted the CFL players while they were in Port-au-Prince.

Lumbala, 25, is a native of Liberville, Gabon and his roots to the African country made him appreciate the gravity of the situation in Haiti, which was very poor prior to the earthquake. However, Lumbala said even he wasn’t prepared to witness first-hand the massive devastation created by the quake, which killed 250,000 people and left another 1.5 million homeless.

“I tried to prepare myself mentally for what I was going to see and you kind of try to watch television to see what they show,” he said. “But I don’t think you can be ready for the things that we saw, the things we experienced.

“Being here gave me so much more than I ever expected it would, good and bad.”

The good, Lumbala said, was seeing a people left so devastated still having a strong will to live, especially the Haitian children.

“The children were really amazing,” Lumbala said. “You look at them and they always are smiling.

“If I lived in those conditions I’m not sure I’d be as strong as they are. I learned so much just watching them and really got a good appreciation of what we have in Canada and the life we have there.

“But the hardest thing, again, was the kids, knowing a six-year-old shouldn’t be going through what they’re going through right now and for them to think this is normal. I have a soft spot for kids and to see them going through that really breaks your heart, but then when you’re playing with them and they’re happy and laughing and smiling, it makes you wonder, `Wow. Where do you get the strength?’ It’s amazing.”

Lumbala and the players were kept very busy during their stay.

They took part in several earthquake victim memorial services, including one on the anniversary of the quake.

They also participated in a memorial march, took part in a CARE Canada program that brought in building supplies and helped Haitians rebuild. They also were involved in the Oxfam Canada Cash-for-work program, which saw Haitians work to rebuild communities and use the money they earned to buy goods and contribute to the economy.

The six-foot-two, 238-pound Lumbala and the players also put their brawn to work, helping remove rubble and contribute to many clean water programs. They ran a youth sports camp and visited people who were injured or disabled as a result of the quake, as well.

But while they might be pro athletes, Lumbala and the players weren’t afforded much luxury when it came to their mode of travel. They rode in two small vans that didn’t have air conditioning, a huge factor considering temperatures in Haiti soared past 30 C with plenty of humidity.

Still, Lumbala was surprised at how quickly his time in Haiti passed by and he’s very sorry to be leaving the Caribbean country.

“You want to do so much more,” he said. “We didn’t expect to change Haiti . . . but I think we did a lot of positive things and I think we brought in a lot more awareness and that was our main goal.

“I think we did and accomplished things we said were going to do. But every time we left a care place or after playing with kids or helped build homes we always had that empty feeling like, ‘Aw, we wished we could’ve done more.’ Then again, that motivates us to come back next year and do more again and just keep it going.”

And, Lumbala said, to ensure people in Canada simply don’t forget about the plight of those much less fortunate in Haiti.