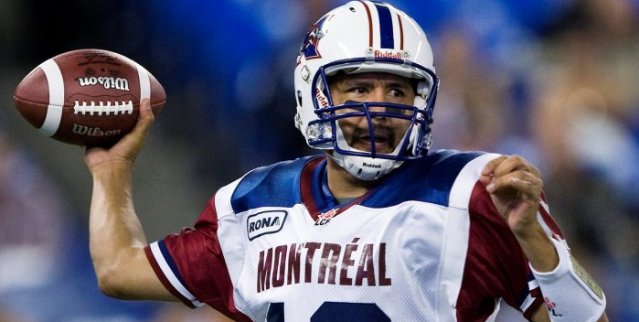 MONTREAL — Even though he knew his chance of recovery was high, Anthony Calvillo admits to feeling a bit of self-pity when he was diagnosed with thyroid cancer.

But it didn’t last long.

“There might have been an hour where I felt sorry for myself but I could truly say that was the only hour where I sat back and had negative thoughts,” the star Montreal Alouettes quarterback told reporters Friday. “I knew from the beginning back in August that if this was cancer it was treatable, it was manageable, it wasn’t going to be life threatening.”

The 38-year-old Calvillo says he’s feeling great now after undergoing successful treatment for the disease and is ready to get back to the football field. He signed a two-year contract extension Friday.

It was after the team’s second straight Grey Cup win in November that the 17-year CFL veteran made the shocking announcement that he was having health problems.

A lesion was found on his thyroid during tests taken while he was in hospital after suffering a bruised sternum in a game in August.

He initially underwent surgery for the lesion in mid-December and test results revealed cancer cells. His thyroid was removed just a few days before Christmas and Calvillo underwent a single treatment of radioactive iodine therapy in mid-January.

“He’s completed all of his treatments, there aren’t any more expected,” said Als doctor Vincent Lacroix. “Anthony will require close follow-up for many years to come but in this type of cancer, the outcome is generally very good.”

The thyroid is a butterfly-shaped gland at the base of the neck, just below the voice box. It produces hormones that help control the body’s metabolism, heart rate, blood pressure and temperature.

“It’s important that things be fine-tuned … so you get back to the hormonal balance that makes you who you are, so that’s what the medication does,” Lacroix said.

Cancer is nothing new to the Calvillo family. His wife, Alexia Kontolemos, successfully fought off B-cell lymphoma after being diagnosed in October 2007 – just a week after giving birth to the couple’s second daughter. She’s now in remission.

Calvillo said the family has taken the health ailments in stride.

“For us, we take it as part of our journey in life, we’re not going to sit here and dwell on the fact and feel sorry for ourselves,” Calvillo said.

Calvillo’s contract extension will take him through the 2012 season and he hopes he’ll still be playing then, even at the age of 40.

“I want to continue to play football for the Montreal Alouettes and look forward to the 2011 season,” Calvillo said. “I know I’m still going to have to be followed by the doctors, that’s going to be part of my journey in life, but I’m also going to have an opportunity to play football and I’m just not ready to retire yet.”

He’s already had a career worthy of the Hall of Fame, winning the CFL’s outstanding player award in 2003, 2008 and 2009, and leading the Alouettes to eight Grey Cup games since 2000.

Calvillo said he hasn’t put any time limits on his career and says he could continue to play for the foreseeable future. But he realizes it’s important for the club to have flexibility to move on.

“It could be one year, it could be three years,” said Calvillo. “I’m letting the organization know that when time comes that they have somebody ready that I’m going to be OK to make that transition.”

General manager Jim Popp said Calvillo has earned the respect of his teammates, both on and off the field.

“Anthony is the leader of the crew,” Popp said in a statement. “He has the attention of all his teammates and they will follow his lead. He has gained unconditional respect through his play, his determination, and his fight.

“Anthony for years has offered his services for what is best for the team. He is not a selfish person and has sacrificed to help keep the Alouettes at the top.”