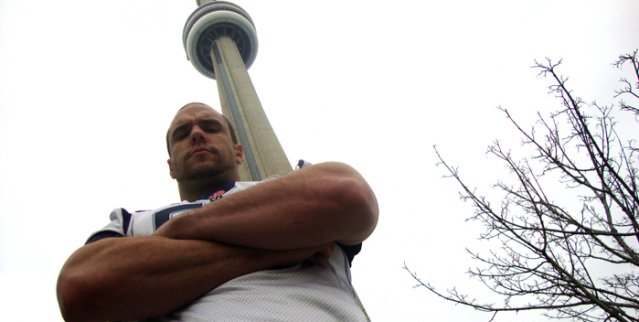 TORONTO — At 6-feet, 7-inches tall, Toronto Argonauts’ 2010 second overall selection, Joe Eppele does not have much to look up at. On April 14, 2011, he will take on a challenge that will even make a giant like him feel miniscule.

Joe is set to join hundreds of Torontonians in the annual climb up the CN Tower, sponsored by WWF Canada. “I didn’t realize how crazy this concept seemed until this very moment,” said the Washington State product, as he drew his head back and gazed upward at the western hemisphere’s largest freestanding structure.

Joe has been training vigorously for the upcoming 2011 season, and explained that he has had to pay more attention to the strength of his cardiovascular system if he plans to make the 1,776 step journey a successful one. “I have been doing 15 or 20 minutes of extra cardio everyday to prepare for this; hopefully that will help me out come April 14.”

With this monster of a man sitting at approximately 310 pounds at the time of the interview, there was a question that just needed to be asked: Why?

“Why not?” he replied with a grin. “I have a friend who asked me for a donation for his climb. Instead of donating, I told him that I would join him instead.”

Eppele also added that it gives him another opportunity to give back. “I love having the chance to help other people and organizations because I have had so many people give me a chance to do what I love for a living.”

Incase climbing over 150 flights of stairs was not a daunting enough task, Eppele is willing to up the ante if he reaches his donation goal of $1,776. “I want to earn $1 for every step in the CN Tower. If I do, then I will do the climb in a Sasquatch outfit.”

Fans can donate to Eppele’s cause in support of WWF Canada by clicking here.