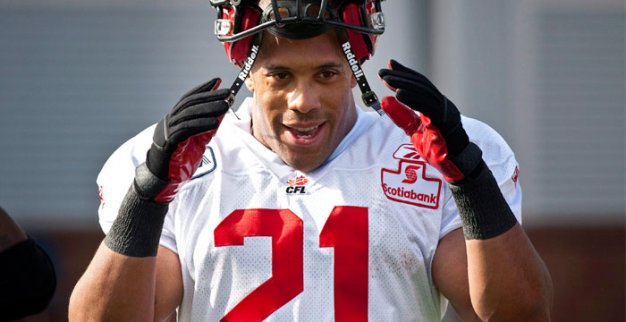 CALGARY — Joffrey Reynolds is beyond having to prove himself as a running back in the Canadian Football League.

But that won’t stop him from constantly trying.

Take, for instance, his trip to a World Health gym four months ago to see how his 31-yearold body had fared after nearly seven seasons of running over defensive linemen, linebackers and DBs, all of whom were attempting to separate Reynolds from the football and, in many cases, his senses.

During the assessment, it was discovered that Reynolds, who became the Calgary Stampeders’ career rushing leader last season, discovered he had, in his terms, “weak shoulders.”

“They tested my range of motion (in his shoulders) and the stuff I could do at different angles, and they found my range of motion wasn’t good,” said Reynolds on Monday, after the Stamps’ training camp morning practice. “But four months later, I have great range of motion. I used to have trouble holding my arm straight up. Now, I feel a lot stronger in my upper body because I’m able to use other muscles that I wasn’t using before.”

There, in a nutshell, is what has made Reynolds the most reliable, the most durable and the most grounded running back in the CFL since he entered the league in 2004. Never satisfied. Never complacent. Always looking for an edge.

“He’s a physical freak,” nodded fullback Rob Cote, who saw Reynolds’ off-season training regime up close this year. “He works so hard in the off-season, and he hasn’t lost a step as long as I’ve been here with him. I really liked working out with him this off-season, and I tried to shadow him a little bit trying to keep up with his work ethic. It sets a good example for the team.

“There’s lots of guys who want to put in the work and then just go home. He’s not one of those guys. He would come and work out with us in the morning, and then do some yoga or a spin class -he’s always doing something.”

And it’s working, obviously. A couple of weeks ago, Reynolds was run through a battery of drills by Stamps strength and conditioning coach Brent Monson, to compare his results with the results he had in postseason testing last January.

Reynolds was six pounds lighter, had added three inches to his broad jump, pushed out three more benchpress reps and ran a 4.55-second 40yard dash -just 1/10th of a second slower than what Reynolds figures was his best time (4.45), when he came out of the University of Houston.

“It’s good to see him improving in the measurables,” said Stamps coach and GM John Hufnagel. “Reliability and dependability are two huge parts of being a professional football player. He knows there’s competition every year and he wants to play football. He enjoys the game, and it’s very important to him.”

Reynolds is coming off his sixth straight 1,000-yard rushing season (he finished with 1,200 on the nose), just one short of Kelvin Anderson’s club record, and two shy of Anderson’s league mark.

That’s despite sharing more carries with Canadian tailback Jon Cornish than he had in the past, and, notably, not uttering a peep of complaint.

“He’s just a total pro,” said Stamps right guard Dimitri Tsoumpas. “Just the way he carries himself is total professionalism. I really haven’t seen that out of many guys at all, and I dare say that he’s probably one of the top professionals I’ve dealt with in my career. It’s a thrill to block for him. I would go through a wall for him because I know he’s going to make it worth my while.”

And if Reynolds has his way, he’ll keep doing that for as long as he can. He’s as healthy as ever, and while there’s the usual array of young talent in camp to challenge, he seems not the least bit fazed by the challenge the youngsters are presenting.

“I don’t feel like I’m on my last legs, or like, ‘Oh, I’m just trying to make it through this training camp,’ ” he said. “I respect talent. That’s the thing in professional sports -that’s why you try to be prepared for training camp. Because you never know who the competition is and where it’s coming from. I just try to be prepared to be the best player I can be. If that’s good enough or not good enough, at least I know I’ve done my part.”