Lions serve up friendship and food in Kamloops 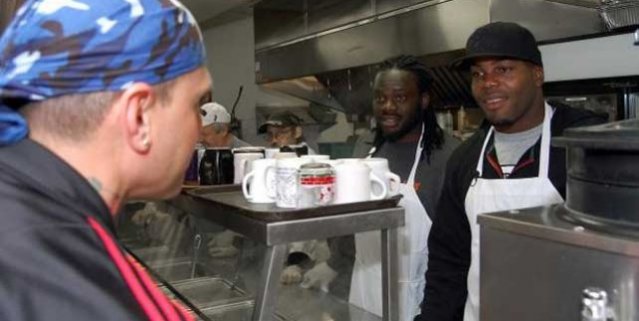 Lions serve up friendship and food in Kamloops

Those street people who felt honoured to be given an autograph and served up a meal by defenders Solomon Elimimian and Keron Williams, two of the more community-minded Lions, didn’t know, however, that the feeling was mutual.

Elimimian’s mother, Theresa, is a social worker in the Los Angeles area, and her 24-year-old son grew up in public housing and knowing that life doesn’t always deal everybody a fair hand.

Dave Klassen, the team’s spiritual adviser who helped arrange the visit, says that some professional athletes would be uncomfortable in such an environment.

“Some players might say to them, ‘I can’t believe you’re coming here,’ ” Klassen explained. “Their (Elimimian and Williams) love is helping people, loving them and encouraging them. They feel visits like this are well worth it.”

After ladling out turkey stew, rice, hotdogs, turkey rice soup and fruit salad to some of the 150 people who daily regard the mission as a lifeline at lunch time, Elimimian and Williams stayed to chat and sign autographs.

“These (street people) are the real heroes,” Elimimian said. “What they go through in their daily lives . . . they’re a lot tougher than us.

“They’re fighting circumstances, personal demons, mental problems. We’re here for their support. Life is good to us. But I think there are times when we have to humble ourselves. We’re all brothers. We’re all God’s children. We have to help each other. I’m from Los Angeles. I see it every day, people battling drugs, alcoholism, different things.”

Among the diners was Reid Seitz, a former wide receiver at Northern Iowa whom Buono recognized almost immediately.

Seitz was drafted by the Calgary Stampeders in 2002, Buono’s last season as the Stampeders coach and GM.

Buono indicated that a psychological problem kept Seitz from achieving his goal of playing professional football.

Now 31, Seitz, from Dartmouth, N.S., said he wants to start football training again once he escapes a legal entanglement — a charge of possession of a controlled substance.

He is staying at a local men’s hostel, and relying on New Life Mission for sustenance.

“Wally released me before camp even started,” he said. “ I developed a mental illness because of caffeine/ephedrine use in my playing days. Now I’m bipolar/schizophrenic, but I’m trying to turn my life around. My family is trying to get me ready to play professionally.”

“This is reality, right here,” Elimimian said. “It’s great that people who need it (in Kamloops) have a place to go to like this. And the food is pretty good. I would have had some myself, if I hadn’t already eaten.”