Ask the Ref: A conversation with Tom Higgins 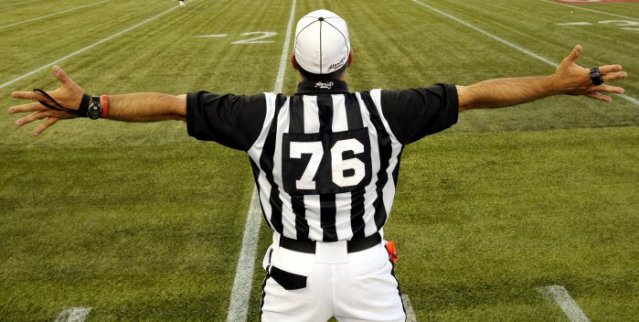 Ask the Ref: A conversation with Tom Higgins

TORONTO — When we say This is Our League, we mean it belongs to all of us who love it, and we’re accountable to you, our fans. We’re inviting you to send in your questions on rules and officiating each week, and our Director of Officiating, former CFL Coach of the Year Tom Higgins, will endeavour to answer them.

Simply send your questions to asktheref@cfl.ca.

Today, CFL.ca gets the ball rolling by posing some questions to Tom on your behalf.

Q. One of the things that makes our league different is the unlimited motion before the snap of the ball. Receivers often get a head start on their routes by attempting to hit the line of scrimmage on the run just as the ball is snapped. But they often appear to be offside, and yet no penalty is called. Why?

A. This is one of the least understood elements of the game. We tell officials to not call a receiver offside if the “the ball is in motion” as he hits the line of scrimmage. In other words, the ball doesn’t have to be in the hands of the quarterback, or almost to the quarterback. It just has to be moving.

If the centre has started the snapping motion, the receiver is not off side. We put this standard in on the advice of our league’s coaches and out of a desire to promote exciting, offensive football. We review these calls often in our office, using super slow motion and high definition, and what looks like offside to the human eye can be well within our rules.

Q. In Week Four, Toronto Argonaut Ejiro Kuale was ejected from a game against Winnipeg for a late, high hit on Bombers quarterback Buck Pierce. Roughing the passer is called fairly often in our league but ejections are rare.  Just what is the standard for ejection as opposed to a penalty?

A. Unnecessary roughness is called for a late hit, a blow above a player’s shoulder, piling on or roughing the passer, to cite a few examples. The penalty is 15 yards. The referee and only the referee can decide to also eject a player for excessive unnecessary roughness or, as the rule book calls it, “rough play.”

The rulebook defines that as “striking an opponent with the fist, hand, knee or elbow in an excessively rough manner, kicking an opponent or any other act of excessive roughness considered by the Referee to warrant disqualification.”

On the play you’re asking about, the referee decided that the hit included several elements that we’re trying to remove from our game: a very late hit on a quarterback and a blow to the head, delivered by a player who left his feet, launching himself and leading with the crown of his helmet.

Q. After that play, the referee reportedly told the Argonauts’ head coach that the player had exhibited “intent to injure.” Is that part of the standard?

A. No, and it was an error to describe it that way, simply because we can never know a player’s intent, as we can’t get inside his head. But it’s fair to say our rules on rough play are designed to prevent serious and unnecessary injury. The bottom line in that situation is the right call was made by one of our best and most experienced officials, even if the explanation was not the right one.

Q. We saw a situation this year when the scoreboard clock said the half was over, and the referee signalled the half was over, but then 1.5 seconds were put back on the clock and another play was run, resulting in a touchdown. How does an issue like that happen?

A. That happened in Week Five in Edmonton. On that play, the time keeper didn’t stop the clock on the whistle, which was sounded with 1.5 seconds left in the half. The referee saw double zeros on the scoreboard clock and signalled the half over.

That may have been the end of it and a mistake would have been allowed to stand if it weren’t for a system we have in place for such situations. A supervising official is in a booth above the field and is connected to the referee on the field through a pager. In this case, the supervising official saw the error and immediately paged the referee and then informed him of the situation.

Another on-field official identified the issue as well. The referee had 1.5 seconds put back on the clock, allowing another play to be run. Officials, on the field and the sidelines, are human and mistakes happen.

But we strive to ensure the right call is ultimately made.  By the way, under our current rules, this situation is not reviewable using video review in our Command Centre. (Some things are reviewable and some are not.) But in this case, it was possible to correct the situation on the field without using video review.

A. Tackling an opponent by grabbing the inside collar of the side or back of the shoulder pads, or grabbing him high on the jersey and pulling down and back. Sometimes, fans or players call for a flag when a defender pulls a player down by placing his hand on top of his shoulder pad, which isn’t against the rules.

Q. In Week Five, Tiger-Cat defensive lineman Justin Hickman appeared to be called for defensive holding and the penalty negated an Alouette turnover. It’s rare for a lineman rushing a quarterback to be called for holding. What gives?

A. The actual call in that case was “illegal block – hands to the face.” A blocking lineman, or one who is rushing the quarterback, can gain leverage on his opponent by shoving his hands under his chin or to his face, which is illegal. On the play you refer to, the right call was made on Hickman. And the referee announced the proper call, but his microphone cut out in the stadium.

TSN put up an incorrect graphic on the television screen that said the call was “holding”, perhaps because the hand signal for illegal block is similar to the one for holding. As a result, an incorrect impression was left and commented upon. TSN does a great covering our league and broadcasting our games, but they too make mistakes on occasion.

Q. Teams recruit football players from the college ranks, develop them on their practice roster, and cut them if they don’t make the grade.  Where do you get your officials and how do you manage your roster?

A. Our officials come from the amateur ranks, mostly from CIS (Canadian Interuniversity Sport). We evaluate every official on every play. Those evaluations are the key factor in deciding who is with us all season long, who gets the most work, and who gets to officiate the playoffs and Grey Cup. We started this season with six crews and a total of 42 officials. By Labour Day, we’ll be down to five crews and 35 officials.

Looking at the longer term, we made Dave Hutton our new Officiating Training and Development Coordinator after he retired as an on-field official this past off-season. Part of his mandate is to expand the CFL’s footprint among amateur officials, with an eye to developing a larger pool of talent for us. He is planning a special clinic for Ontario University Athletics (OUA) officials this month in Hamilton.

He will evaluate the majority of CIS games this fall. And he is developing a series of training videos to be used by Canadian officials at all levels. Like the other teams in our league, we’re always looking to get better and while experience is a huge asset, sometimes that means getting younger.