Fan Blog: My thoughts from the grill 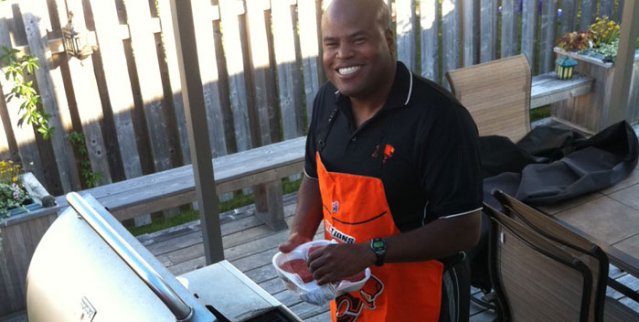 Fan Blog: My thoughts from the grill

As I stand out on my deck barbequing dinner I am left alone with my thoughts.

And with respect to the 2011 BC Lions, my thoughts are surprisingly good.

We have completed seven weeks of the CFL season and I thought that this would be the opportune time share my thoughts on the campaign so far.

To briefly introduce myself, I live in Ottawa and am a huge BC Lions, fan but I am also a huge fan of our league.

Prior to the start of the season, BC seemed poised to have a great year, prompting TSN to recognize the Lions as having the best defence in the league during their annual season preview show.

Missed tackles on the defence coupled with dropped passes and poorly timed penalties have sent the Lions reeling to this surprising record.

Now the talk always seems to come back to Wally Buono and the debate of relieving him of his coaching duties. Quite frankly, while I understand the mentality I have trouble with it as there are two sides to every story.

Side A lies with how, and with whom do you replace the winningest coach of all time?

Here is a man who has been great for the team and the city. I have had the pleasure of meeting Coach Buono on several occasions and sometimes these occasions have been at the Lions Den party during Grey Cup week.

For the last few years at these events, and I’m sure others as well, Buono has had to endure the old conversation that starts with ‘Rough season coach! Next year!’

Coach Buono has always struck me as a classy individual. He has my respect not simply because he is at the helm of my favourite team, but because his record commands it!

He is a true representative of this league and I would find it hard to believe that any other coach hasn’t set him as the bar to one day reach.

The mentality of Side B would state that while he is the winningest coach of all time, lately, he hasn’t been winning.

BC has backed into the playoffs for the last few years, and while they used to be considered as a team you don’t want to visit in the post-season, that is hardly the case anymore.

While I’ll be the first to admit that the team’s performance this season has been subpar, I would also say that the majority of their losses haven’t been lopsided.

But a loss is still a loss.

Though theLions’ record hasn’t been great over the last few years, one advantage that comes with playing in an eight-team league is that you just have to be in the top six to qualify for the playoffs.

This has been a crutch for the team over the past few seasons.

I’m also disappointed in the fans that boo the Lions at Empire Field. When the going gets tough, you don`t get going.

In the end, the team is currently not winning and changes need to be made.

Ok, but what changes?

If you relieve Wally of his coaching duties, who ho should take over? Mike Benevides? Jacques Chapdelaine?

With all due respect to those two fine men, the defence and offence hasn’t exactly been spectacular lately.

The only person in the CFL I would replace Wally with is Dave Dickenson. I’ve said it before and I’ll say it again; he is the greatest football mind in the league today. And if you doubt that, check with Henry Burris and Buck Pierce.

I believe blaming the coach is the easy thing to do and somewhat of a scapegoat. I believe the solution to BC’s problems is to start making some on-field changes.

Why hasn’t Jarious Jackson started yet? Travis Lulay has had seven starts this year and has won only one.

Let’s give JJ a chance!

Or maybe alternate drives? In today’s games that may sound crazy, but remember that BC alternated quarterbacks in the 2006 Grey Cup….and won.

While Travis really impressed me in last year’s Western Semi-Final, I have not seen that same edge since.

In no way am I blaming him or any one player for the team’s struggles – but the current system clearly isn’t working and changes need to be made.

At the end of the day I’m just a fan who would simply like to see his team win more games.

Think of it from a player’s perspective. This simply isn’t just a game to these men, it is their livelihood and it is their careers.

It’s always easy to second guess the decisions of the coach but I can tell you that if I’m at work I wouldn’t want a group of people looking over my shoulder all day long nitpicking my every decision.

‘You filed that report incorrectly Keith! Do you really want to use that font?’ Ok, slight exaggeration but you get the point. I have stuck with Wally for years and will continue to do so. I don’t believe getting rid of Wally will fix this team.

I will end this blog with two messages.

Gentlemen, you play for the best professional sports team in the world. Don’t disagree; I know what I’m talking about.

Do you think you are worthy of being in this league and on this team? If the answer is yes, then show me. Show each other. And most of all show yourselves.

Remember, this is an 18-game season and the best is yet to come!!!!

My second message is for the fans that booed this team last Saturday:

Our team is going through a difficult time and you know what? This is the time that your support is needed.

Every team can feed off the energy of their home fans. While I was disappointed with the loss I was embarrassed at the booing. So if you are one of those fans that were booing, when BC has its next home game against the Argos on Sept. 10th may I provide two options?

Option A,: don’t boo. Option B: If you are someone that tends to boo your team off the field; stay home!

I’m Keith Whittier and those are my thoughts from the grill!!!!!