The traveller’s guide to Swaggerville 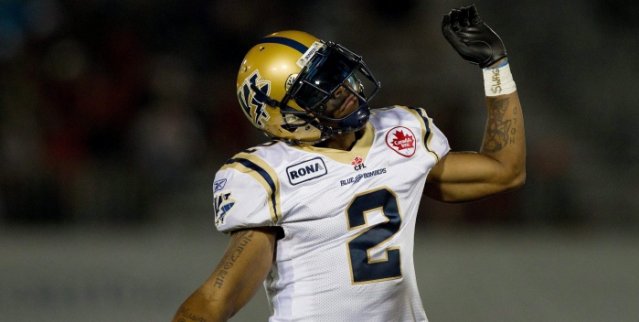 The traveller’s guide to Swaggerville

Founded in 2009 by defensive backs Lenny Walls, Jovon Johnson and Jonathan Hefney, the original Swaggerville comprised just five men, but was quickly expanded. “It was just the secondary, originally,” explains Hefney. “But then the linebackers were leading the team in interceptions to start the 2009 season, so we had to let the linebackers in.”

Swaggerville expanded again this season to include for the first time the Bombers’ defensive line, who were granted admission on the basis of their league-leading run of quarterback sacks.

Jovon Johnson was the only mayor Swaggerville ever had until defensive lineman Odell Willis, currently leading the CFL with eight sacks, staged a coup d’etat of sorts this season, informing reporters one day that he is now the mayor and Johnson is the CEO.

The coup was bloodless. “Yeah, I guess I’m the CEO now,” says Johnson. “I have no idea what the difference between the mayor and CEO is. At the end of the day, I’m the creator anyway.”

The original residents of Swaggerville were overwhelmingly African-American, with safety Ian Logan conspicuous as, at various points in its incarnation, the only caucasian and only Canadian resident of Swaggerville.

So what’s it like being a white caucasian male — and a minority? “We’ve been playing together, some of us, for three years now,” says Logan. “Now the Swag thing — I’m not big on promoting myself or making a big hoopla. But in terms of the way we play, I’m very much a part of it.”

Depends on who you ask — but whatever definition you use, Swaggerville is the fastest growing community anywhere. With just five residents only two years ago, it is safe to say Swaggerville is a boom town.

Johnson is even more inclusive.

“Anyone that is associated with cheering for Winnipeg can be a resident of Swaggerville. It started out as just as the defence, but we’ve got some southern hospitality going on and we’ve decided to open the doors to everyone. We’re welcoming everyone now — as long as they’re from Winnipeg, they can be a part of it.”

There’s only a couple, but they’re a bit counterintuitive.

“First of all, you’ve got to be humble,” says Johnson. “And secondly, you have to play with a lot of electricity on the field. You have to be a good role model, on and off the field. And you can’t be arrogant or cocky, but you do have to have confidence and that whole aura about yourself. If you’ve got a confidence in yourself, then you can be a part of Swaggerville too.”

Willis says it’s even simpler than that. “It’s not that deep. It’s just the way we play together — with a swagger. It’s just an old-time football mentality — it’s not a secret society or nothing like that. It’s not any of those things people are making it out to be. It’s just something we like to do to give us all some confidence.”

“When we come in at halftime, we just tell each other we have to pick it up. And people have been responding to that,” says Johnson. “The second half, we’ve been closing teams out all season. That’s when we’ve been playing our best football.”

HOW TO GET THERE

There is only one souvenir in Swaggerville — a highly coveted T-shirt that asks simply, ‘Got Swag?’ The players themselves produced just 500 of the shirts originally and sold them on their own, getting the message out on Twitter.

And with that, a monster was created. “I get emails constantly,” says safety Ian Logan. “But I’m not selling them. I’ve got to tell people all the time, ‘Look, I can’t get you a T-shirt…”

Johnson said the popularity of the shirts has become so unmanageable that the Swaggerville leadership has decided to go into partnership with the Bomber Store for the rest of the season. The shirts were out of stock earlier this week, but a Bombers spokesman said a new shipment is imminent. Cost: 30 bucks.