Remembering the thrill of when BC Place first opened 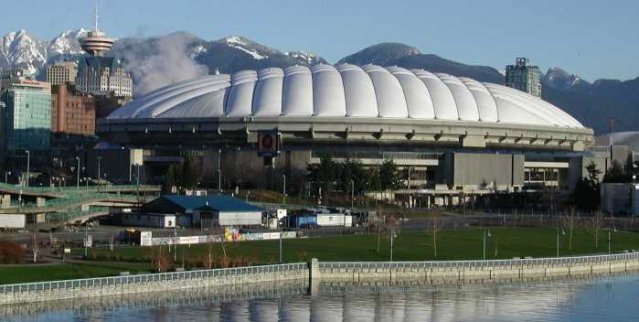 Remembering the thrill of when BC Place first opened

VANCOUVER — The atmosphere was electric.

The crowd was loud and the possibilities seemed limitless.

When the B.C. Lions took to the field July 24, 1983, for the first CFL game at the newly built BC Place Stadium it was like turning a page in the club’s history.

The building was state of the art. It was better than anything else in Canada. Old rain-soaked Empire Stadium was a thing of the past. Football would now be played in warm and dry conditions indoors.

A crowd of 41,810 gathered under the sparkling white roof to watch the Lions beat the Saskatchewan Roughriders 44-28.

Guard Gerald Roper remembered the energy that rippled through the building.

“It was electric,” said Roper, another member of that 1983 team. “It was like you were a rock star.

“It was an incredible building. It was an awesome experience to run out there when they called your name. It was pretty exhilarating.”

History will repeat itself for the Lions when they play the Edmonton Eskimos in a refurbished BC Place on Friday night.

The Vancouver Whitecaps will play the Portland Timbers on Sunday afternoon in a Major League Soccer match.

Since April 2010, BC Place has undergone $560 million in renovations including a retractable roof, a huge centre-hung video board, new seats with cup holders, a modern turf and improved acoustics.

With the stadium closed, the Lions and Whitecaps played at Empire Field, a temporary facility built for $14.4 million on the Pacific National Exhibition ground in Vancouver’s east end.

BC Place was originally built for $126 million. It opened in 1983 in advance of the 1986 World Expo. At a time before cell phones and tablet computers, the stadium with its inflated doomed roof was the latest in space-age technology.

The first sporting event in the building was June 20, 1983, when the Whitecaps defeated Seattle 2-1 in a North American Soccer League match played before 60,342 spectators.

Carl Valentine, a striker on that Whitecaps’ team, felt dwarfed the first time he walked into the stadium.

“It was unbelievable,” said Valentine, who now works as an ambassador for the Whitecaps. “You were going into a stadium with 60,000 seats.

“It was just so big. That was your first impression. We knew it was sold out, so that was kind of exciting. On the night it was just incredible.”

The Whitecaps played the rest of that season at BC Place, but the NASL folded the next year.

“It was still a good atmosphere in there and we enjoyed it,” said Valentine. “It was kind of taken away because our league was close to folding.”

Before BC Place, the Lions and Whitecaps played at old Empire Stadium. The venue opened July 30, 1954 and was built for that year’s British Empire and Commonwealth Games.

The first soccer match played there was in June 1956 with Everton of the English First Division playing Scottish League champion Aberdeen.

By the 1980s, Empire Stadium was showing its age.

“The dressing rooms weren’t anything to write home about,” said Passaglia. “You had to walk downstairs through a tunnel that had water coming down the walls at times when it was raining hard.

“The turf was like playing on carpet at home.”

Moving to BC Place was like leaving a basement apartment for the penthouse in a high-rise.

“It was like moving into a brand new house,” said Passaglia. “Everything was sparkling. The dressing rooms were new.”

Valentine said the BC Place turf felt like feathers after the rock-hard surface at Empire Stadium.

“The turf was great to play on,” he said. “Coming from Empire where the carpet was painted on . . .when you fell down you had all these rug burns.

“It was pretty nasty. For me, (BC Place) was the best stadium in the NASL at the time.”

Passaglia loved the huge crowds BC Place drew in the early years.

“There wasn’t a better place to play in,” he said. “When the crowd made noise you knew it was for you because it drowned out everything.

“In those years the hair on your arms would stand up.”

Over time the lustre of BC Place faded. The Lions flirted with bankruptcy and the building wasn’t quite so state of the art.

Keeping the roof inflated became costly. The building was dark and hot during the summer.

“In summer time it was cooking in there,” said Passaglia. “It was never cool.

“The roof was never as white as it was when it first opened up.”

Like many people Roper wonders if spending half a billion dollars to repair BC Place was the right decision.

“There are so many people that need help in this city of ours,” he said. “It’s done now. Let’s try and enjoy it.

“Let’s book it out as many nights as we can and make some money off it.”