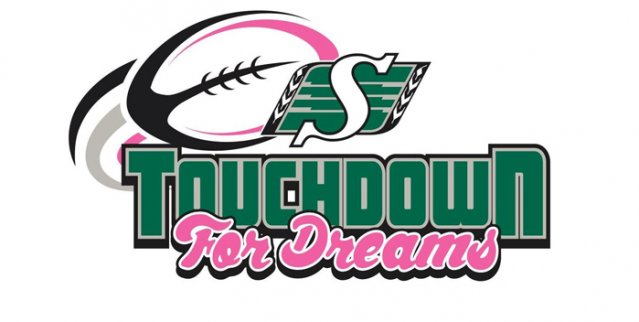 REGINA — The Saskatchewan Roughrider Football Club and the Saskatchewan Cancer Agency officially unveiled their “TOUCHDOWN FOR DREAMS” campaign this afternoon. The goal of the program is to raise funds to grant dreams to Saskatchewan women who are living with a life threatening diagnosis of cancer.

This year, the CFL launched a “Pink Initiative” across the CFL to “tackle women’s cancer”. On the weekend of October 21stand 22nd all CFL teams will wear pink equipment in support of this initiative.  Equipment includes chin straps, gloves, and wrist bands.  This equipment will then be auctioned off on the CFL website in support of each of the teams’ chosen charities.

The Saskatchewan Roughriders have adopted their own initiatives including the selling of pink player pennants featuring Barrin Simpson, Darian Durant and Andy Fantuz. Five hundred pennants of each player have been produced and will be for sale in all Rider stores as well as at the October 16th game.

Pennants will be sold by Saskatchewan Cancer Agency volunteers along with the wives and girlfriends of our players and coaches for $20.00 each. One hundred sets of player pennants will be autographed by the players and sold for $100.00.

The second initiative is a bandana program which will feature buying two pink bandanas for $10.00. One bandana will feature the Touchdown for Dreams logo while the second bandana will be plain pink. The plain bandana is to be used to write a message of hope or a message in memory of that “special someone”.

At the end of the game on October 16th, the Riders will have a post-game celebration where people can bring their messaged bandanas to the game and participate with players and coaches. The bandanas will be tied together on a structure that will be placed in the north end zone for the remainder of the season as a show of strength and support for women battling this terrible disease.

Structures will also be set up pre-game on the practice field for fans unable to participate after the game. Bandanas will be available and sold in all Rider Stores.

For those fans unable to attend the game, but would like their bandana included on the structure, can mail their bandana to the Saskatchewan Roughrider Business Office, 1463 Albert St.  Regina, Sask.  S4R 2R8  c/o Kelly Forsberg.