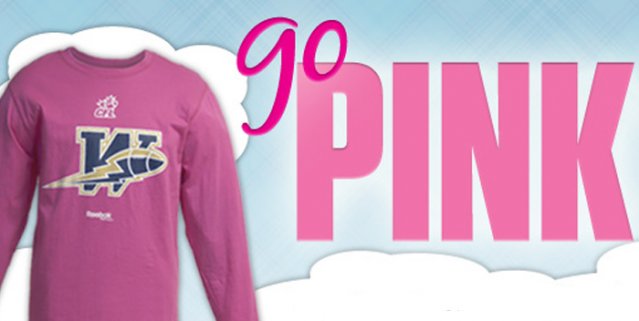 Last year, through the generosity of Bomber fans, over $17,000 was donated to the cause and the goal this year is to exceed that number.

Keeping Abreast was founded by Jackie Stephen after her own courageous battle and recovery from DCIS (ductal carcinoma in situ) breast cancer in 2007.

A few short weeks after being diagnosed, Stephen received her mastectomy and reconstructive surgery on the same day.

“My breast reconstruction surgery made the difference between surviving and thriving after breast cancer,” says Stephen.  “I still look like me, feel like me, and can sometimes even forget I had cancer. This surgery is an extraordinary gift for women with breast cancer.”

Dr. Ethel MacIntosh and Dr. Ed Buchel of the Health Sciences Center performed Stephen’s mastectomy and immediate reconstruction surgery and strive to do so for every woman with breast cancer in Manitoba who needs it.

The positive outcome and gratitude Stephen feels for everyone who supported her and her family throughout the ordeal, led her – with the support of her family and close friends –to create the Keeping Abreast Fund, in support of Breast Cancer Reconstruction Surgery, Research & Education.

Winnipeg Blue Bomber players will be able to wear pink themed items from Reebok on their October 22nd home game vs. Montreal.

As well, fans can purchase for the first time Blue Bomber pink hats, short sleeve and long sleeve Reebok branded t-shirts and a new style of pink logo’d toques and scarves with the Blue Bomber and Breast Cancer logo on them.  This merchandise is available by visiting the Bomber Store at Canad Inns Stadium or online at www.bluebombers.com/store. All Orders placed online that contain any pink merchandise will receive free shipping courtesy of the Bomber Store while stock lasts.

Fans are encouraged to get their tickets as a limited number are still available for what will be a very important game against the Montreal Alouettes which will go a long way in determining which team will get first place in the East division and a chance to host the East Final.  Tickets can be purchased online at www.ticketmaster.ca or by calling 1-855-BOMBERS.  Tickets are also available at the Safeway location at Madison Square on Ness Avenue where a portion of each ticket sold will go towards the 2012 Richard Harris Scholarship Fund.

At halftime, a very special tribute to past Blue Bomber Cheer Teams will be performed featuring current and former members of the Blue Lightning, the Blue Brigade and the Bomberettes.

Kickoff is set for 2pm.