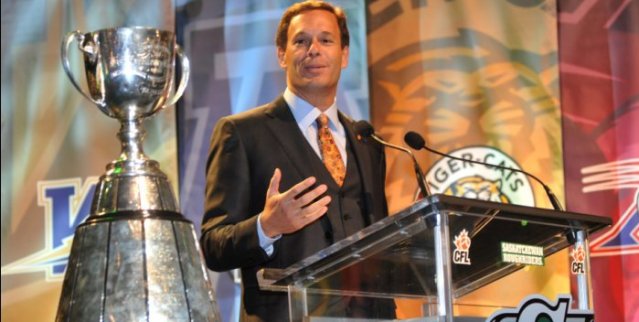 REGINA — The Grey Cup is returning to Saskatchewan for what is being billed as an unforgettable party on the Prairies.

CFL commissioner Mark Cohon was in “the heart of the CFL” Thursday to announce that the Saskatchewan Roughriders will host the 2013 Grey Cup.

“The cup is about four quarters of exciting football where often in the last three minutes there’s no guarantee that the lead is safe. It’s all about great football,” Cohon said as the Grey Cup was carried into a splashy news conference in Regina.

The 101st year of the championship game will be played at Mosaic Stadium. The game is set for Nov. 24th, 2013.

It will be the third time the Roughriders have hosted the Grey Cup.

Regina staged the Grey Cup for the first time in 1995 and was a part of CFL history as the Baltimore Stallions defeated the Calgary Stampeders 37-20 to become the only American-based team to ever win the crown. What’s more, the game was affectionately dubbed The Wind Bowl due to gusts of 85 kilometres an hour at Taylor Field.

Regina last hosted the Grey Cup in 2003, when seating at then Taylor Field was expanded to 50,000 with the addition of roughly 20,000 temporary seats for the CFL’s title game. That year, the Edmonton Eskimos defeated the Montreal Alouettes 34-22, avenging a 25-16 Grey Cup loss to the Als the previous year at Commonwealth Stadium.

Cohon noted that in ’03 people opened their homes to give some CFL fans a place to stay.

“That’s a reflection of this community,” said Cohon.

“There’s more hotel rooms now, they probably won’t have to do that, but I think those types of things are characteristic of what it means to be part of Rider nation.”

Hotel rooms might be new, but Mosaic Stadium is not.

The stadium, with its bench-style seating, is structurally sound but it is also one of the oldest buildings in the Canadian Football League. It was originally built as a rugby field in 1910 and has been renovated numerous times over the years.

The team said in March 2010 that it’s getting to the point where Mosaic will no longer be usable.

The provincial government said in February that it was forced to abandon plans for a new domed stadium in Regina because the federal government didn’t kick in cash.

The city of Regina is pushing ahead with plans for a redevelopment project that includes building a new home for the Saskatchewan Roughriders. But it won’t be ready for the 2013 Grey Cup.

“I think what they’re going to look at is how can they make upgrades for the Grey Cup, how can they enhance it to really make it look better,” said Cohon.

“But you know it’s a great environment in there, it’s a great feeling and people are coming for the experience. What they need to make sure is that the concessions, the facilities are appropriate for 50,000 people and that’s what they’re going to try and do.”

The announcement also brought excitement to a province where fans, who are said to bleed green, are watching their beloved team struggle through a dismal season.

The Roughriders (4-10) are reeling from three straight losses in which they have scored a total of nine points. They have not beaten any of their West Division rivals this season.

After making it to the Grey Cup in 2009 and 2010, the Riders have already been eliminated from post-season contention in the West this year. The only way they could qualify for the playoffs would be to finish ahead of the Hamilton Tiger-Cats in the East.

“This has been a very tough year for us on the field. We’re not anywhere near where we want to be,” said Rider president and CEO Jim Hopson.

Hopson said the goal is to get back to the Grey Cup for 2013, but joked he’s not sure fans could handle it.

“I know how excited they’ve been the last few years when we’ve been at the Grey Cup and what it meant to have the Riders in the Grey Cup. But I can only imagine what it would be like if we were in the Grey Cup in Saskatchewan,” said Hopson.

“I just think we’d probably have to have a provincial holiday for a few days.”