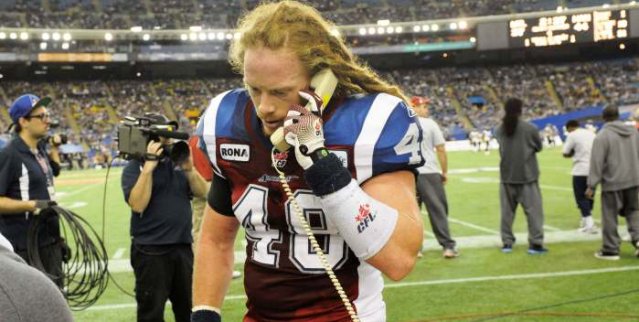 “There is a bear in the woods. For some people, the bear is easy to see. Others don’t see it at all. Some people say the bear is tame. Others say it’s vicious and dangerous. Since no one can really be sure who’s right, isn’t it smart to be as strong as the bear?”

This was the opening of a TV commercial for the 1984 U.S. Presidential campaign of Republican candidate Ronald Reagan. Reagan went on to win the election and serve his second term in the White House.

And with that, comes the end of today’s history lesson.

Bear Woods. Anytime you hear those words put together, it is usually trouble. For the Montreal Alouettes, Bear Woods is a 6’0”, 245 lbs. linebacker who had to fill the spot of the injured Ramon Guzman in Sunday’s playoff loss to Hamilton.

The graduate of Troy University was good for five tackles, and a couple of remarks about his wonderful hair style. Not only does Bear Woods have hair that rivals the NFL’s Troy Polamalu, but he also possesses one of the greatest names to ever play in the CFL.

Speaking of great names, here are some more:

Sandy Beveridge – Not something you want on a vacation, the eight-year pro with the Hamilton Tiger-Cats was primarily a special teams player with the club, recording 77 tackles throughout his career. He also chipped in defensively with 124 tackles, five interceptions and six fumble returns.

Dick Curl – Excuse me? No, that’s now how you exercise your… uh, never mind.

A.J. Gass – Not known to be the cleanest player on the football field, Gass endured a ten-year career with the Edmonton Eskimos, bringing a nasty edge to the defence and helped them win two Grey Cups along the way.

Pat Woodcock – No relation to Pinocchio, Woodcock is the Grey Cup record holder for the longest reception at 99 yards. In eight seasons, the Ottawa native played for four teams, including the hometown Renegades.

Buster Rhymes – Along with playing wide receiver for two years with the Winnipeg Blue Bombers, the 1988 Grey Cup Champion is the inspiration for rapper Busta Rhymes’ stage name.

Winston October – Made to play in the crisp Canadian weather, he was one of the best return men in the CFL during early stages of the new millennium.

Gizmo Williams – Given the nickname by college teammate Reggie White, Gizmo was a two-time Grey Cup champion, and a five-time CFL all-star.

Manny Hazard – A name more suitable for a hard-nosed defensive player, Hazard was voted as the Argos player of the year in the 1993 season.

Chuck Assman – Former Eskimos teammate Jed Roberts says he used to draw a caricature of Assmann on the locker room board that was made out of a rear-end and eyes.

Joe Smith – Hailing out of Detroit, Michi—I mean San Jose, Cali—Pittsburgh, Pennsyl— err, Monroe, Louisiana, the former Lion and Bomber possesses one of the most common names in America. Not so much funny or interesting, as just plain winning.

Horace Morris – I’m guessing that he and Buster Rhymes could give Busta Rhymes a run for his money in the rap World.

Amara Kamara – Hailing out of Liberia, the current linebacker with the BC Lions was a standout in college at Temple.

Kevin Smellie – Can you just imagine the amount of jersey photo ops had the former Argo been a teammate of A.J. Gass in Edmonton?

Molly McGee – Not exactly the name you would expect to see replace the legendary George Reed at running back in Saskatchewan.

Craig Yeast – The former rising star of the Hamilton Tiger-Cats fell from grace after back-to-back 1,000-yard seasons in Hamilton.

Chijioke Onyenegecha – Not if I have Dan Goodspeed.

Ab Box – No, not the latest technology from 2 AM infomercials. Box was a standout running back, quarterback and punter for the Toronto Balmy Beach Beachers and Toronto Argonauts in the ’30s.

Annis Stukus – The legendary coach, GM and player of several CFL teams has his name etched on the CFL’s annual coach of the year trophy.

Yo Murphy – Who you calling Murphy? The two-time Grey Cup champion receiver retired after his last ring in 2007 with the Saskatchewan Roughriders.

Of course, you cannot talk about great names in the CFL without talking about the most fitting one of them all.

Tom Canada was a five-year pro with the Winnipeg Blue Bombers, where he was named a divisional All-Star twice, and helped the Bombers represent the East Division in the 2007 Grey Cup.

Now, we just need someone to name their child “Rouge”.

For more commentary from Tyler Bieber visit his blog at CFLDaily.ca