CFL Daily: Taking a look at this year’s All-Stars 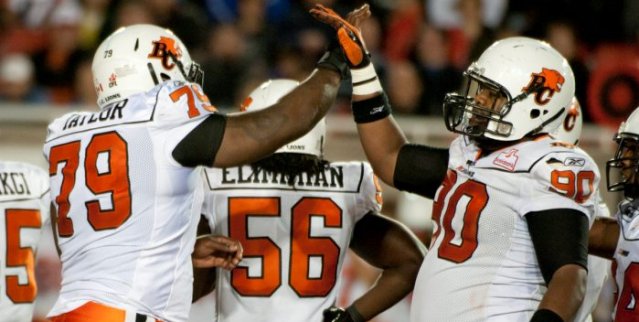 CFL Daily: Taking a look at this year’s All-Stars

The 2011 CFL All-Star team was announced on Wednesday, rewarding the top 27 players at their respective positions for their superb play during the season.

For Lewis, Tsoumpas, Dales, McCallum and Owens, it was their second consecutive all-star nomination.

In his 11th season in the CFL, Angus Reid is finally an all-star. The native of Richmond, BC was drafted fourth overall by the Toronto Argonauts in 2001, but after being released from the team after training camp, he signed with the Montreal Alouettes. Reid’s time in Montreal was also short-lived, as he was shipped off to the Lions in exchange for defensive lineman Adriano Belli.

During the 2009 season, Reid had a consecutive games streak end at 142 after breaking his foot in the Lions 17th game of the season. Reid started the 2010 season as the club’s sixth lineman, but quickly came off the bench in Week 4, where he would remain in the lineup for the rest of the season.

Reid helped the Lions to a CFL best 29 sacks allowed in the 2011 season on his way to his all-star honour.

For the bulk of 18 games this season, Reid spent his time snapping the football to quarterback Travis Lulay, who like Reid earned his first all-star honour in 2011.

Lulay beat out his competition for the Most Outstanding Player award, Anthony Calvillo.

Despite that fact, it’s not a guarantee that Lulay will claim the award on Thursday, November 24th when they are handed out in Vancouver.

Unlike the player awards, the fans get a vote in the all-star process. They share the vote along with members of the Football Reporters of Canada, as well as the CFL head coaches. When it comes to the Most Outstanding Player award, it is just the reporters who get the votes.

Despite that fact, it is likely that Lulay will still be the recipient of the award. The last time the all-star quarterback was nominated for the MOP award and did not win was in the 2002 season. Although, that year, the award was between a quarterback and a receiver – Anthony Calvillo and Milt Stegall.

Despite representing the East Division for the Outstanding Offensive Lineman award in the 2010 season, Alouettes left tackle Josh Bourke did not receive an all-star honour. He was defeated by his opponent, Ben Archibald, as well as the Toronto Argonauts Rob Murphy. Bourke is back in 2011 as the East nominee for the offensive line award, and this time was given the all-star nod.

Bourke’s competition for the award in 2011 is his fellow all-star tackle, Jovan Olafioye. The 23-year old right tackle out of North Carolina Central University was a West Division all-star as a rookie in the 2010 season. Like former Lions before him, Cam Wake, Martell Mallett, and Stefan Logan, it is expected that Olafioye will look to join an NFL team in the winter.

Olafioye’s defensive teammate, Khalif Mitchell will likely look to join his NFL aspirations. Mitchell actually came to the Lions in the 2010 season after being released from the San Francisco 49ers. Mitchell teamed up with fellow all-star, and defensive tackle teammate Aaron Hunt to bring down opposing quarterbacks a combined 13 times in 2011.

The duo became the first teammates at defensive tackle to represent the league as all-stars since Doug Brown and Denny Fortney achieved the feat with the Winnipeg Blue Bombers in 2002.

Montreal Alouettes linebacker Chip Cox is the only player on the 2011 all-star team to earn the honour for a third year in a row. Cox has been consistent in earning his three nominations, as his stats have changed only slightly since his first win in 2009. His tackles are down just two from 2010, and three from 2009, while he added one more interception to his resumé from 2010, and two from 2009.

Cox is joined by first year all-stars Solomon Elimimian and Jerrell Freeman at the linebacker position.

Known as the ‘Elimimianator’ for his physicality on the field, Elimimian became the ninth BC Lion to win the CFL’s rookie of the year award in 13 years last season.

In his third season in Saskatchewan, Jerrell Freeman finally broke through to be a full-time starter for the green and white, and finished the season first in the league in tackles with 105. He also chipped in for six sacks and three interceptions. Freeman is a free agent in the off-season, and is expected to pursue the market in the CFL as well as in the NFL.

Freeman was the only all-star for the Riders, which has not happened since the last time the team missed the playoffs in 2001. That year, they had zero selected all-stars.

Battling Freeman for the CFL’s Outstanding Defensive Player award is the Blue Bombers ball-hawk cornerback Jovon Johnson. The second time CFL all-star led the league in interceptions this season with eight. In four seasons with the Bombers, Johnson has tallied 21 interceptions.

Being named to the all-star corner opposite Johnson was Byron Parker. This season, Parker broke the career record for interceptions returned for touchdowns at nine. Parker’s 2011 all-star berth was the third of his career. In eight seasons in the league he has recorded 28 interceptions.

Joining Parker and Johnson in the defensive backfield, albeit slightly controversial is BC’s Korey Banks. In his fourth all-star win, Banks beat out Calgary’s Keon Raymond who tweeted his thoughts about Banks taking the award:

“How does a guy with 1 interception beat out a guy with 5 ints and leads the league in int return yards. Do people watch the games #robbed” (You can follow Raymond on Twitter @Mr_Raymond25)

While it is true, Raymond had five interceptions to Banks solo pick, including a thrilling 117 yard interception return for a touchdown, Banks had three sacks, while Raymond had zero.

In comparing their stats fully, Raymond finished with 47 tackles to Banks’ 42. Raymond was able to recover one fumble during the season, while Banks recovered two. Raymond also edged Banks in pass knockdowns, seven to six. Banks also had three tackles for a loss, while Raymond had zero.

I guess it comes down to what you consider to be the better season. For defensive backs, it is usually bad to have a high amount of tackles, but obviously good to have more interceptions and pass knockdowns.

Could Raymond’s case have been affected on reputation and name basis? This season was Raymond’s first divisional all-star nomination, while Banks recorded h
is seventh nomination.

It was simply bad luck for Hamilton’s kicker Justin Medlock. In any other year, Medlock would have been named the all-star kicker. It just so happens that there is a 41-year old guy in BC who broke a couple of records in 2011. Medlock had the fourth most accurate season kicking field goals in CFL history. McCallum on the other hand, had the most efficient.

McCallum, despite being a 19-year veteran of the league earned just his first all-star berth last season.

Dales had the best season of his career punting the football in 2011, averaging 47.2 yards per punt. Last season, he became the first West Division punter to win the league all-star honour since the 2005 season, when Winnipeg’s Jon Ryan achieved the feat. After Ryan, the West punter previous to him to be named CFL all-star was Calgary’s Tony Martino in 1998.

Chad Owens joins a list of elite kick returners to have come through the Argonauts. There was Dominique Dorsey, Bashir Levingston, Pinball Clemons, Rocket Ismail, and now Owens. Although, not solely on special teams, Owens became the first football player in history to achieve back to back seasons with over 3000 total yards.

All eight CFL teams were represented in the 27 players chosen, although the Roughriders and Hamilton Tiger-Cats only had one all-star each.

The BC Lions dominated the all-star team, with exactly one-third of the players being from their team. Winnipeg was second with five players chosen. Montreal had four players selected; Calgary had three players honoured, while the Eskimos and Argonauts had two each.

The total for the Lions matched their 2007 season, when they also led the league in players honoured, with nine.

For more commentary from Tyler Bieber, visit his blog at CFLDaily.ca