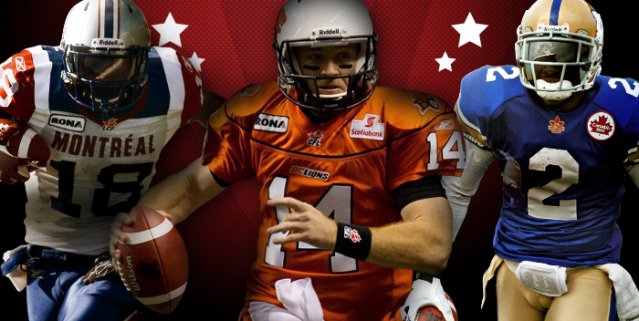 The All-Stars were selected by fans, Football Reporters of Canada (FRC) and CFL head coaches.

In total, the voting panel consisted of 62 voters, plus hundreds of thousands of fans from across the country.

Fans were given the opportunity to have their voice heard through the CFL All-Star Balloting Program presented by The Vancouver Province, Calgary Herald, Edmonton Journal, Leader-Post, The StarPhoenix, National Post and the Montreal Gazette.

The B.C. Lions lead with nine CFL All-Stars, including Western Division Most Outstanding Player nominee Travis Lulay on offence and the hard-hitting Solomon Elimimian on defence. In Winnipeg, the Blue Bombers will feature five All-Stars, headlined by a pair of defensive standouts in Jovon Johnson and Jonathan Hefney.

The Montreal Alouettes will have two offensive dynamos leading their four All-Star selections, as Brandon Whitaker and Jamel Richardson were both named to the team, while veteran receiver Nik Lewis will be one of three to represent the Stampeders.

Toronto and Edmonton each had two All-Stars selections, with Chad Owens and Jerome Messam leading their respective clubs. Rounding out the 2011 selections are Justin Hickman from the Tiger-Cats and Jerrell Freeman from the Roughriders.

“Thanks to all of our fans, coaches and media who helped us recognize our great players by voting for this year’s all-stars,” said CFL Commissioner Mark Cohon. “And to our all-stars, congratulations on behalf of board of governors and fans on being honoured for your outstanding play this season.”

Today’s news does not guarantee Travis Lulay, who is nominated for the Gibson’s Finest CFL Most Outstanding Player, will also be honoured at the player awards show during Grey Cup week. That’s because there are different voters for all-stars and most outstanding player awards.

All-Stars are selected by a combination of fan balloting, CFL head coaches and Football Reporters of Canada. Fans do not vote for most outstanding player awards.

The 2011 Gibson’s Finest CFL Player Awards will be handed out in Vancouver on Thursday, November 24.