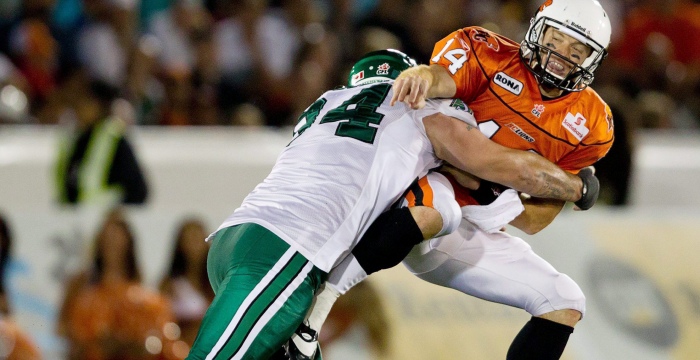 Romero departs from Saskatchewan following one season with the Riders. In 2011, Romero registered 34 tackles, two sacks and a pair of forced fumbles.

O’Sullivan (6’2 – 232) was a sixth round pick (186th overall) by the New Orleans Saints in the 2002 NFL Draft. The 32-year-old NFL veteran saw his most game action in 2008 when he was named the starting quarterback for the San Francisco 49ers heading into the regular season.

The California native finished the 2008 season with nine game appearances, including eight starts on his way to tallying 128 completions on 220 attempts to go along with eight touchdowns. During his nine year NFL career, O’Sullivan has thrown for 1,866 yards and 13 touchdowns to go along with 39 rushing attempts for 145 yards.

The former University of California-Davis quarterback was twice named a finalist for the Harlon Hill Trophy (awarded to the top player in Division 2) and finished his collegiate career with 10,745 yards passing and 94 touchdowns.

Harris (6’0 – 200) was a fifth round pick (157th overall) by the Philadelphia Eagles in the 2009 NFL Draft. The 26-year-old Virginia native opened the 2009 regular season as the Eagles starting free safety appearing in 15 regular season games with one playoff appearance. The former Virginia Tech Hokie finished his rookie season with 43 combined tackles and two passes defended.

A standout corner during his four years at Virginia Tech, Harris was twice named First-Team All-ACC (2007 & 2008) and finished his career with 128 combined tackles and 15 interceptions, four which he returned for touchdowns. Harris joins former collegiate teammates Justin Harper and Chris Ellis as new members of the Green & White heading into the 2012 season.

Jackson (5’10 – 188) played four years at Oregon. In his senior season Jackson tallied 70 tackles, six knockdowns, two interceptions and one forced fumble on his way to appearing in the Rose Bowl vs. Ohio State.

The 23-year-old San Diego native finished his career at Oregon with an impressive 159 tackles, 15 pass knockdowns and 8 interceptions, one which he returned for a touchdown. Jackson spent time with the Baltimore Ravens and most recently on the practice squad of the Jacksonville Jaguars in 2011.

Rushing (5’9 – 186) was a seventh round pick (238th overall) by the Indianapolis Colts in the 2006 NFL Draft. The 28-year-old return specialist made his NFL debut for the Colts in week 1 of the 2006 season and would wind up totaling 1,300 combined return yards during his career, including a 90 yard punt return for a touchdown vs. Oakland in 2007.

The Oklahoma native was part of the Super Bowl Champion Indianapolis Colts as they claimed victory over the Chicago Bears in Superbowl 41. The former Stanford Cardinal finished his career as one of the top three return men in school history, totaling 1,409 yards.

The Roughriders also announced they have released the following import players from their roster.