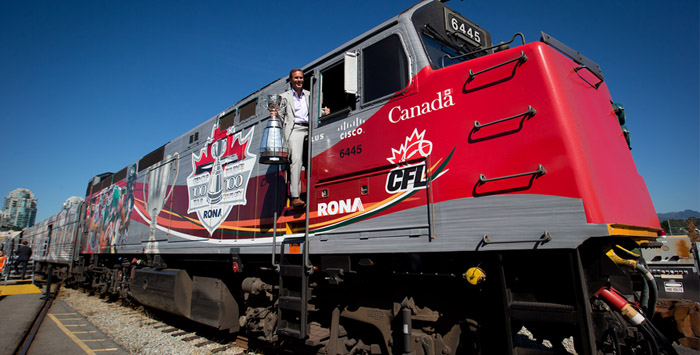 “If the railway is the ribbon of steel that first linked Canadians to one another, the Grey Cup is the silver chalice we have used to toast our bond.” – CFL Commissioner Mark Cohon

VANCOUVER — The Grey Cup 100 Train Tour presented by RONA begins an epic Canadian journey today that will bring the iconic trophy and so much more to over one hundred communities across Canada.

“As we commemorate this year of the 100th Grey Cup game by taking the Grey Cup trophy, and special exhibits and activities that capture its lore, to Canadians, we’re really celebrating its place in the history, culture and future of Canada,” said Mark Cohon, Commissioner of the Canadian Football League.

At a special ceremony this morning here at Pacific Central Station in Vancouver, the specially retrofitted Grey Cup 100 train was officially unveiled and toured by dignitaries, the media and members of the White Rock Titans Football Club.

On Sunday, the train will be open to the public here in Vancouver from 10 a.m. to 4 p.m. for the very first Fan Celebration before it leaves the station to begin a 4,100 kilometre journey which will ultimately conclude in Toronto at the end of November for the 100th Grey Cup Game and Festival.  Sunday’s Fan Celebration will include appearances by the BC Lions Cheerleaders, Mascots, a live DJ and Juno award-winning band the Arkells will be taking the stage. More information is available at www.greycuptour.ca

Wrapped in famous Grey Cup images, the 302 metre (990-foot), 730 ton (1,609,374 pound) train includes a high tech car that beautifully showcases the trophy and gives fans the opportunity to have their photo taken with the Cup and experience the lore surrounding it through videos and touch screens that link them to great plays, team photos, programs and even ticket stubs from past Grey Cup games.

A museum car features everything from a bust of former Governor General Earl Grey, who donated the Cup that bears his name back in 1909, to a jersey worn in the 1921 Grey Cup Game, to cleats worn in the 1962 Fog Bowl, to more than 18 Grey Cup rings that have been proudly worn by Grey Cup champions.

A team car captures the stories of the CFL teams that will compete for the Grey Cup: fans can tour a replica locker room, learn about their favourite players and see highlights of their team in action.

The Grey Cup 100 Train Tour presented by RONA will visit all eight CFL cities – including Calgary, Edmonton, Regina, Winnipeg, Hamilton, Toronto and Montreal – as well as Ottawa, the national capital and site of so much Canadian football history, and Moncton and Halifax.

The trophy will also be transported to other cities and towns not directly accessible by rail, visiting schools, hospitals and community centres.  In all, the tour will encompass over 100 stops, including some places the Cup has never been before.

“The Grey Cup 100 Train Tour will share the traditions and meaning of the Grey Cup with Canadians right across our country,” said the Honourable James Moore, Minister of Canadian Heritage and Official Languages. “Our Government is proud to invest in a project that will bring Canadians together, just as the Grey Cup itself has done for more than a century.”

RONA, Canada’s largest Canadian distributor and retailer of hardware, home renovation and gardening products, contributed the building supplies that made the exhibits possible. In addition, the RONA Home Field Advantage program — which will invest $240,000 to refurbish playing fields and other recreational assets in CFL communities — will ensure the tour leaves behind a positive legacy.

“As a partner of the CFL for over a decade, RONA is proud to be the official presenter for this historic tour, which includes many celebrations across Canada throughout the 2012 season,” said Karim Salabi, RONA’s Executive Vice President, Marketing.

“The Grey Cup is an integral part of our Canadian heritage, and this partnership creates a great sense of pride among our customers and employees across the country,” he added.  Mr. Salabi also noted that as a company deeply involved in the communities where it has a presence, it was entirely natural for RONA to partner with the 100th Grey Cup.

Cohon praised VIA Rail and Canadian Pacific for their tireless efforts to make the dream of a train tour a reality.

“The railway and the Grey Cup are both synonymous with Canada,” he said. “If the railway was the ribbon of steel that first linked Canadians to one another, the Grey Cup is the silver chalice we have used to toast our bond. So we’re enormously grateful for this opportunity to celebrate the 100th Grey Cup in this quintessentially Canadian way.”

“VIA Rail Canada is proud to partner with the CFL on the Grey Cup 100 Train Tour. This historic event will allow Canadians from coast to coast to see the Grey Cup trophy up close and in person,” said Pierre Santoni, Senior Director, Domestic and International Sales.

As the official technology partner of the Grey Cup 100 Tour, Cisco will enable the ultimate fan experience by providing the train’s core network and collaboration technology. In accordance with Cisco’s commitment to supporting Canadian communities, Cisco will donate some of the technology used to local children’s hospitals to facilitate continued collaboration.

To celebrate the 100th Grey Cup Game, TELUS will present the first ever Fan Cup.  Fans themselves will create The Fan Cup trophy during The Grey Cup 100 Tour by using a custom-built TELUS Penny Press to make their own 100th Grey Cup collectable out of a real Canadian penny. The Fan Cup will be engraved with the names of thousands of CFL fans from across the country and live inside The Canadian Football Hall of Fame in Hamilton, Ontario as a symbol of appreciation for over 100 years of loyal fan support.  To learn more about The Fan Cup visit www.telus.com/fancup.

The Grey Cup trophy, long presented to the champions of the CFL is a symbol of Canadian sporting excellence. The Grey Cup game is the inspiration for an annual Canadian pilgrimage, with thousands travelling to the host city each year, and millions joining via television. And the Grey Cup Festival – several days of family activities, concerts, parties and other social events leading up to the big game – is a Canadian cultural phenomenon.

“While forever linked to the great game of Canadian football, the Grey Cup has come to represent something even bigger: Canadians ability to come together, stand united, and celebrate something that is uniquely ours,” Cohon said.