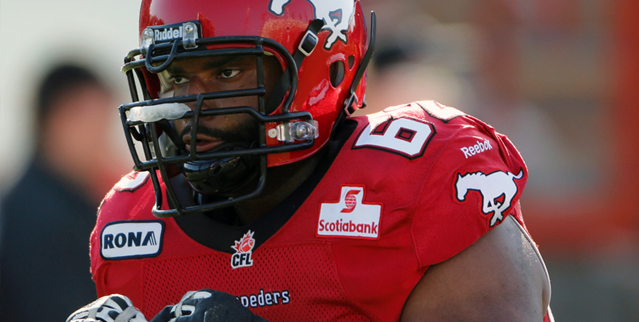 TORONTO — TSN’s Engraved on a Nation airs eight unique documentaries that bring you some of the great stories – some renowned and others less told – in Canadian Football history, capturing what makes our game so unique. Following each episode, CFL.ca brings you the best of your comments from around the web in our Armchair Film Critic.

‘The Crash of Flight 810’ revisited a plane crash back in 1956 that sent shockwaves through the entire CFL, as five players on the flight back from an annual East-West All-Star game were killed when Trans-Canada Air Lines Flight 810 crashed into Mount Slesse.

Former Bomber great Cal Jones was one of the players on board, and 56 years later, it is his tragedy that’s brought another family together.

‘The Crash’ tells the story of the 1956 All-Stars, and the journey of current Calgary Stampeders offensive lineman and grandson of Jones, Edwin Harrison, through his family’s historical roots.

Here are some of your reactions to ‘The Crash’:

@kellyferguson23 @EdwinCHarrison I just watched #EngravedOnANation last night and it gave me chills! My Grandfather was also on that flight (John B Hemming).

@newfiehun Just watched @EdwinCHarrison #EngravedOnANation – didn’t realize that nice man I had a convo with at the Hamilton game was Edwin’s dad!

@AdamBlasetti Great story last night on #EngravedOnaNation #TheCrash. It’s a great watch but know that @EdwinCHarrison is an even better man.

@njaffer23 @EdwinCHarrison “The Crash” was such a compelling story, thanks for being able to share with all #CFL fans #EngravedOnANation Oh good win 2!

@RSnicks18 Another fanatic #EngravedOnANation! @EdwinCHarrison Is a class act and an inspiration! Guys like him are what truly make the CFL great!

@gerrarddw The #engravedonanation documentaries are fantastic. The crash is as much a bomber episode as a stampeder. Gives you chills about sleeping in

@Haileyk89 Finally got to watch Engraved on a Nation – The Crash.. gotta say well done @CFLonTSN and thank you @EdwinCHarrison for sharing your story

@CFLNumber1Fan @GameTimeArt there sure is – just watch the Engraved on a Nation series-buckets of tears!! #CFL

@HowieMooney Engraved On A Nation continues to impress. The Crash was extremely compelling. And apparently the series is on iTunes.

@Jenngurl84 Just watched Engraved on a Nation all I wanna do is give @EdwinCHarrison & Family a big hug. Even if you aren’t a fball fan its a must see.

@Chris_Dion Going to watch the episode of Engraved On A Nation about the plane crash. Having survived one myself, this one will be the toughest to watch

@SteveBrownBC Powerful story on TSN: Engraved on a Nation. The TSA DC4 that flew into Mt. Slesse in 1955 carrying 4 CFL all stars. I have hiked to it 🙁