Morris: Cornish’s mom there for motivation 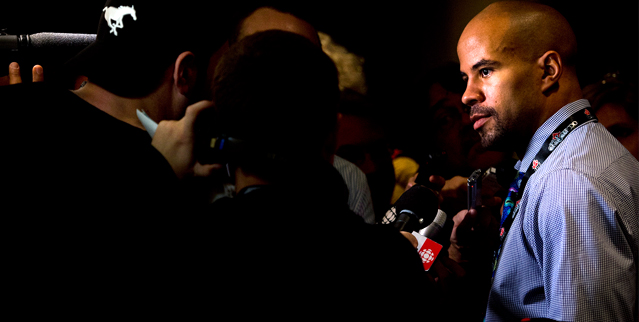 Morris: Cornish’s mom there for motivation

Jon Cornish remembers returning home to New Westminster, B.C., from the University of Kansas on a Christmas break one year and seeing how excited his mother Margaret was.

He always held his mother in the greatest respect. Margaret had made sacrifices to raise five children by herself on a music teacher’s salary. Now Cornish was pleased to see how happy she looked.

“She was super excited,” the Calgary Stampeders’ running back said Thursday after his team practiced for this weekend’s 100th Grey Cup game Sunday against the Toronto Argonauts.

That’s when Cornish learned his mother was in a relationship with Andrea Mann, an international relations coordinator with the Anglican Church of Canada. The two would later be married.

It was a revelation many sons might find difficult to accept, especially one who grew up in the masculine world of football.

In the world of professional sports homosexuality remains a delicate topic. Of the main professional leagues in North America no hockey, football, baseball or basketball player has admitted to being gay while still playing their sport.

Cornish said he’s frustrated and angered when he hears homophobic slurs among athletes.

“I actually am pretty outspoken,” he said. “I don’t like certain slurs being used. Any time I hear them I speak up.

“I think for the most part my team is pretty respectful. We have a lot of smart people on the team. You don’t really hear too many homophobic things going on at all. It’s really not something that comes up.”

All week there has been plenty of focus on what Cornish has done on the field as a Canadian-born running back. He led the CFL with 1,457 rushing yards on 259 carries and 11 touchdowns.

That broke the 56-year-old Canadian rushing record of 1,437 yards set by Normie Kwong of the Edmonton Eskimos and the Stampeders. Cornish also became the first Canadian to win the rushing title since Orville Lee ran for 1,075 yards for Ottawa in 1988.

Cornish hopes by understanding his mother’s relationship more people will change any negative attitudes they have toward gays.

“I would like people to be more accepting,” said the 28-year-old. “People are always surprised when I tell them the story about my mom’s situation.

“For me it’s something I’m proud of. She’s been through a lot and she finally found somebody that she loved. For me there is nothing more positive in the world.”

Cornish never met his father. He died while Cornish was attending college.

“I am thankful he gave me some good genetic code,” Cornish said.

Cornish’s mom made sure her children attended private schools and were involved with French immersion.

“She always worked to ensure we were getting the best, even though she wasn’t as capable of giving us everything on a music teacher’s salary,” he said.

“After we were all done she actually decided to go back to school. She got her masters of ethics and she became an Anglican priest. That’s what she wanted to achieve. For me that’s been motivation my entire life.”

Earlier Thursday John Hufnagel, the Stampeders’ coach and general manager, was asked if he would have any problem with a gay player on his team.

Cornish knows some people are confused when they first learn about his mother’s relationship.

“I would say most people are surprised,” he said. “Quite often you don’t normally associate lesbians with having kids.

“Everybody seems pretty accepting of it. Especially after they meet them.”