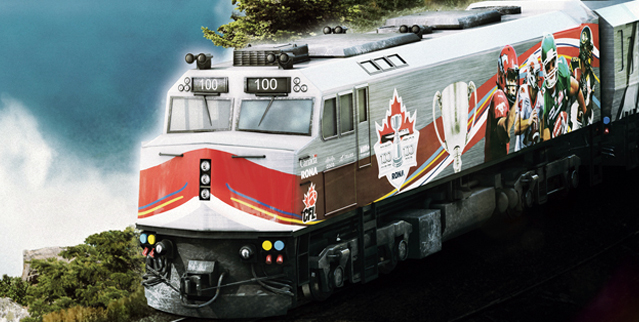 How do you describe the journey that’s taken place over the past 10 weeks?

How do you describe the encounters our Cup has had with people from coast to coast- at train stations, at schools, on farms, in hospitals and in restaurants?

You don’t…. at least not adequately anyway. Attempting to summarize the pilgrimage this Cup has made would be futile. It would be unfair and unjust, quite frankly, to reduce these 70 days to soundbites, slogans, cliches.

They’ve just been too meaningful, too jammed with emotion and passion and stories and people.
People like Tracey in Okotoks, whose late husband played in the league and whose young son finally gained an understanding and appreciation for his father’s career after seeing the train.

Like Gary in Sarnia, who was reduced to tears after finding a photo of his father, a ’36 Grey Cup champ, on the train’s interior.

Like Lela in Medicine Hat, a restaurant owner who couldn’t have been more thrilled when the Cup visited her tiny breakfast joint. “Thank you for including us little people,” she said, her voice wavering.

Like Ron in Barrie, an armed forces veteran who knocked an item off his bucket list when he got a photo next to the Grey Cup, his colourful military medals proudly displayed on his chest.

Like Emily in Iqaluit, a middle schooler overjoyed that the Grey Cup would make its way to her hometown. “We don’t have that much,” she said.
That list could go on and on and on.

Every day we met people who live and breathe Canadian football, whose weeks are merely bridges between game days, whose jerseys are staple wardrobe pieces.

Every day we met people who were astounded that the train and the Cup were traveling such an extensive route. “This is my history, this is my country on rails,” was how one fan put it.

And more often than not we met people who have a personal connection with the Cup — their grandfather won it, their uncle hoisted it, they posed next to it as a child. Their stories were so meaningful because they reinforced the fact that this iconic Cup has made its way into hearts and homes all across the country.

What became clear during our travels was that this Cup means something to people because it represents them. Although it bears the names of heroes, they are the people’s heroes, heroes from down the street or the next town over. They are our heroes, just as it is our Cup.
We’ve created memories with this tour. This voyage, though over, has left a legacy.

People often remember exactly where they were during a particular Grey Cup game- on the sidelines, at home, at a military base, at a hospital.
I suspect, judging from the reaction we got when we rolled into a new stop each day, that people will now remember where they were when the Grey Cup arrived, when the train pulled into town.