Cauz: Why Jon Cornish should win the Lou Marsh Trophy 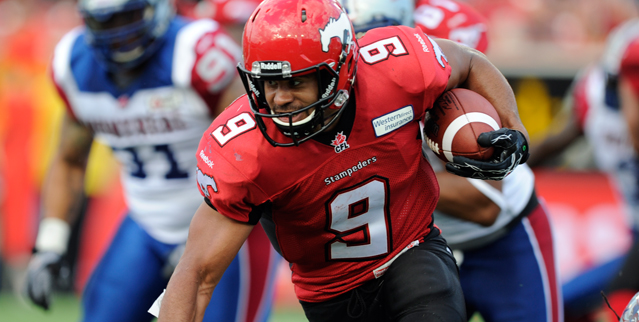 Cauz: Why Jon Cornish should win the Lou Marsh Trophy

It was early in the second quarter of the Lions vs. Stampeders game when I started to wonder: Why shouldn’t Jon Cornish get some serious consideration for the Lou Marsh Award? Heck why shouldn’t he win it outright?

There were two plays that really caught my eye: The first was an 18-yard run, while the second was a short toss from Kevin Glenn that turned into a 25-yard gain. Those two displays were all you needed to know about Cornish’s abilities.

Whether it’s correctly reading the blocking on the fly and picking the right holes, making linebackers look foolish or outrunning safeties, Cornish has done it all this year.

I understand we are two months away, but isn’t this one of the sports debates we love having in Canada?

Now let me set the record straight. This is not one of those opinion pieces framed around the premise that I am 100 per cent correct and that to choose any other candidate is pure folly.

If you want to throw your support behind James Hinchcliffe, Jonathan Toews, Sidney Crosby, Graham DeLaet, Milos Raonic or any other deserving athlete then go right on ahead.

This is just me presenting the case, my case for Canada’s best football player.

Let’s first get the easy part of the argument out of the way — the statistics. Cornish leads the league in rushing yards, total yards from scrimmage and total touchdowns (1,545, 1,865 and 13 respectively).

This of course is no fluke as he also lead the league in rushing in 2012 as well. Durability is also a big factor when looking at the overall worth of a player and Jon has only missed one game over the past two seasons.

Most people take more fake sick days in one month than games missed by Jon over the past two seasons, a remarkable run considering playing running back is just a wee bit more taxing than working in Accounts Receivable for Best Buy.

Now let’s go inside those numbers a bit. The only other player who can stake a claim as the best in the CFL is of course Kory Sheets. I have spent plenty of time extolling the virtues of Sheets and how important he is to the Roughriders.

But I have to give the edge to Cornish and not just because of pure statistics. Sheets has had the luxury of playing with the durable Darian Durant who has missed only one game this year.

Conversely, Cornish has seen three different signal callers hand him the ball. This is not to take away anything from what the Stampeders quarterbacks have accomplished in 2013. H

However, when your team is rotating between the “next star” in Drew Tate, to the “I’m basically a rookie” in Bo Levi Mitchell to the “wait am I starting or not this week???” steady veteran in Kevin Glenn well I think it is safe to say Cornish’s degree of difficulty has been higher than what Sheets has faced.

Wait this is not a Sheets vs. Cornish debate! Sorry, bad habit.

Back to Jon Cornish and the Lou Marsh Award.

Cornish’s value goes beyond being able to perform in the middle of a season-long game of quarterback roulette. He also had to take on more of the offensive burden in August with the loss of the team’s best receiver in Nik Lewis.

So to summarize Calgary has gone through three quarterbacks, lost their best playmaking receiver and through it all they have the league’s best record all the while leading the CFL in scoring. The one constant in this has been Jon Cornish.

Far more shocking than just how good Cornish has been is the fact that no one from the CFL has won the award since Russ Jackson’s crazy 1969 season that saw Jackson win league MOP, Grey Cup MVP as well as the Lou Marsh.

By the way, no athlete has ever left on top quite like Jackson. His final game saw him guide Ottawa to a 29-11 Grey Cup win over Saskatchewan, while setting the record for most touchdown passes in a game.

Since Jackson won, we have had just about every sport represented from hockey and baseball to kayaking and rowing.

I am not saying any of the past winners are not deserving, far from it, I just believe it’s time we recognize the greatness of Cornish and his 2013 season. Jon has already broke his own record for most yards rushing by a Canadian and with three games left a 2000 yard season is not out of the question.

Have I convinced you? Maybe not.

Alright, how about this? If Cornish pulls a Russ Jackson and wins league MVP while breaking Johnny Brights’ single game Grey Cup rushing record of 169 yards en-route to winning Grey Cup MVP than can I have a consensus for Cornish for the Lou Marsh?

Probably not, but it will make for a good debate.