Heisman Hype: A look at all Heisman winners’ CFL debuts 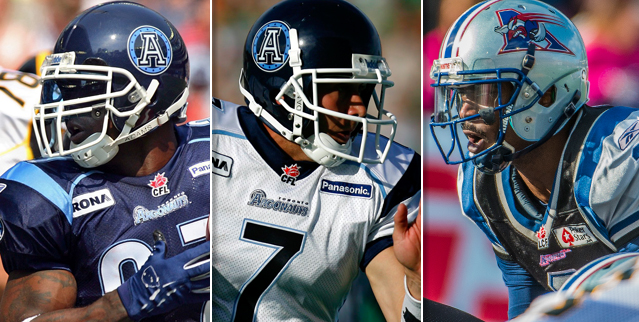 Heisman Hype: A look at all Heisman winners’ CFL debuts

TORONTO – Montreal Alouettes quarterback Troy Smith wasn’t the first Heisman Trophy winner to play in the CFL, and he likely won’t be the last either.

In fact, Smith joins a very small group of players who can claim they’ve hoisted the highly-coveted Heisman Trophy, one that recognizes the most outstanding player in American college football.

Prior to Smith, six former Heisman winners stepped foot onto a CFL field, the first of which being Billy Vessels in 1953.

Here’s a look at the debut performances of all Heisman winners:

Vessels’ first game in the CFL was on August 29, 1953. He rushed for 41 yards on 9 carries and caught 2 passes for 52 yards. He also threw a pass for 6 yards. The Edmonton lineup was hard to crack then. Vessels’, however, burst onto the scene when he returned a kickoff 95 yards for a touchdown on August 31, 1953 to win the game in the 4th quarter.

It was only his second regular season appearance in an Eskimos’ uniform and he added 34 rushing yards and 57 passing yards (he was a multi-purpose player in the Edmonton offensive backfield).

Vessels got better as the season progressed and finished with two 100-yard rushing games late in the year, adding another kickoff return for a TD. That record of two in one season still stands (tied by many others including Will Ford this year).

Johnny Rodgers’ CFL debut came on August 1, 1973 and he had a quiet game but did score one TD. Dubbed the ‘Ordinary Superstar’, Rodgers rushed for 32 yards on 5 carries and caught 2 passes for 33 yards and one TD in an 18-9 win over Hamilton.

That same season, Rodgers was named the Most Outstanding Rookie.

The following year,Rodgers, who often ran into the endzone backwards when he scored touchdowns, helped lead Montreal to the 1974 Grey Cup.

The venerable Doug Flutie joined the Lions in 1990 and made his on-field debut on July 13, a game that saw BC tie the Stampeders 38-38. He finished 21-of-37 passing for 271 yards, 2 interceptions and 2 TD passes. He threw a last-second game-tying “Hail Mary” touchdown pass to send the game into overtime.

He played with the Stampeders until 1996, when he signed with the Toronto Argonauts, leading them to back-to-back Grey Cup victories in 1996 and 1997. He left the CFL with career passing yards of 41,355 and 270 touchdowns.

Inducted into the Canadian Football Hall of Fame in 2008, Flutie’s career up north was nothing short of remarkable, highlighted perhaps by his six Most Outstanding Player awards.

Ware debuted on September 9, 1995 for Ottawa against BC as a late game substitute in a 43-24 home loss. He had a very promising game throwing a late 22-yard TD pass to Nigel Williams and was 4-of-8 for 45 yards. Ware earned the start the next week against Birmingham on September 17, but went 22-of-38 for 220 yards and 3 interceptions in a 40-9 loss.

Williams made his official CFL debut on June 17, 2006, in a home game against the Tiger-Cats at the Rogers Centre. In that game, he rushed for 97 yards on 18 carries, with his longest carry for 35 yards in the fourth quarter. Williams caught two passes for 24 yards as the Argonauts defeated the Tiger-Cats by a score of 27-17.

In what was his only season in the CFL, Williams carried the ball 109 times for 526 yards and two touchdowns. He also hauled in 19 passes for 127 yards.

On July 22, 2006, Crouch made his regular season CFL debut against the Saskatchewan Roughriders in Regina, Saskatchewan. Coming in at the start of the second half following an injury to Spergon Wynn, Crouch sealed the win for Toronto with solid play, including a 94-yard completion to Arland Bruce III.  Ironically that was the same game Ricky Williams broke his arm and was out until late-September.

Smith arrived in Montreal in mid-August under much fan-fare. The former Buckeye initially joined the Als’ practice roster, and was supposed to be brought through the system and the team’s playbook with caution, as GM Jim Popp was looking towards Smith to serve as Anthony Calvillo’s eventual replacement.

That plan, however, was quickly put to rest. As a result of a season-ending injury to Calvillo and some inconsistent play by both Josh Neiswander and Tanner Marsh, Smith was inserted into the starting lineup last week against Hamilton, throwing three touchdowns on 247 yards passing.