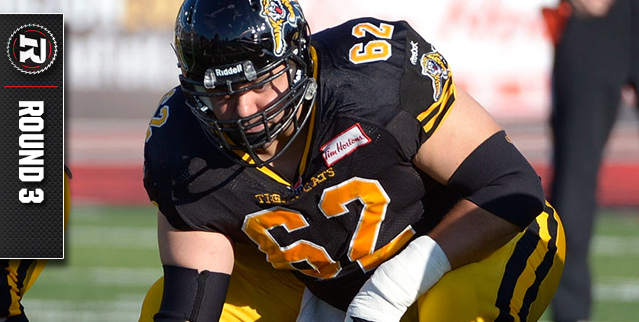 OTTAWA – Marwan Hage’s 10-year career with the Hamilton Tiger-Cats has come to an end as he, Calgary safety Eric Fraser and six others were selected in the final round of the 2013 Expansion Draft.

Hage joined the Ticats in 2004 after playing at the University of Colorado and has been an East Division all-star in the past.

Eric Fraser was an all-star in 2012 with the Stampeders and joins the REDBLACKS as the favourite to enter camp as the starting safety.  Since making his debut in 2010, Fraser racked up 108 tackles, 3 quarterback sacks and 5 interceptions.

Jason Pottinger joined the Toronto Argonauts during free agency of the 2009 off-season after starting his career in BC.  The McMaster product has 179 defensive tackles and 6 sacks.  Pottinger is a veteran non-import who is entering his ninth CFL season.

Rory Kohlert was the only free agent of the 24 players chosen.  He had a career-year in Winnipeg last season, making 45 receptions for 493 yards and 4 touchdowns with the Bombers.