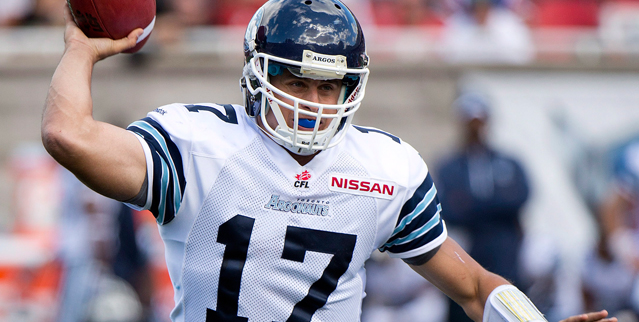 TORONTO — Zach Collaros’ days as a Toronto Argonaut are officially over.

Wednesday, the team announced that the upstart quarterback has been released, as he enters free agency early.  Collaros, 25, was slated to become a free agent on Feb. 15.

The news comes less than a week after Argos general manager Jim Barker indicated that it was likely Collaros would test the market. Barker said he tried re-signing Collaros and remains very interested in having Collaros back with the club. But by releasing him now Barker hopes to gain clarity on Collaros’ situation by Feb. 15 rather than having to deal with that uncertainty once free agency begins.

“This has nothing to do with our relationship with Zach, we have a great relationship. He can now go and do the things he has to do to see where things are at and it will give us a little more clarity,” Barker told the Canadian Press.

“What’s difficult is when you have a player who isn’t sure how much he might be able to get on the open market. That’s more difficult than dealing with having other teams talk to him,” he added.

In 14 games last season, seven of which he started, Collaros threw for an impressive 2,316 yards and 14 touchdowns, completing 66.2 per cent of his passes in the process.

His best game through the air came in Week 13 against Calgary, when he threw for 330 yards and four touchdowns, leading the Boatmen to a 33-27 win.

Collaros also proved to be effective on the ground, rushing 59 times for 246 yards and five touchdowns.

Barker was also clear he still wants to re-sign Collaros.

“We’ve been trying to sign him and obviously he wants to go to free agency, which is totally his right,” Barker said. “We’re not going to pull out.”

With Collaros now out of the picture, expect Trevor Harris, Josh Portis and Mitchell Gale to compete for the backup spot.

“People forget Zach got the start (when Ray was hurt) but it was neck-and-neck with him and Trevor,” Barker said. “Zach made the most of it and kudos to him for doing that.

“Trevor Harris has been with us now for a couple of years, he’s got a tremendous upside and both Mitchell Gale and Josh Portis have a year in the system, they understand the reads, they understand what it takes to be a quarterback in this offence. I think there’s going to be great competition to be our No. 2 and No. 3 should Zach choose to go somewhere else.”

With files from The Canadian Press