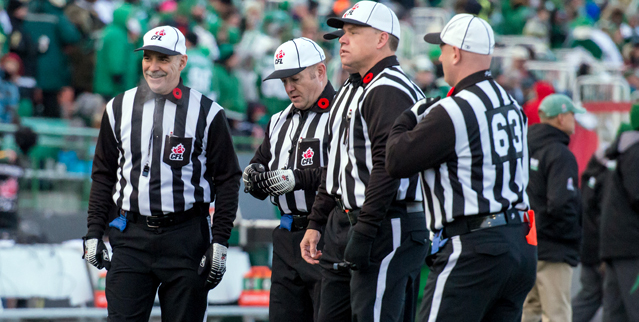 TORONTO — Ever wonder what it takes to be a CFL official? Now’s your chance to prove you have what it takes. We took 10 questions from the actual 2014 Rules Exam and want to put you to the test.

Each question is true or false. Team A = Offence. Team B = Defence.

1. Team A attempts to punt the ball. The kick is blocked and the ball is recovered by Team A. Team A players may block an opponent below the waist.

2. While running with the ball, Offensive Player #32 fumbles the ball then dribbles it into Team B’s goal area to out of bounds in goal. The next line of scrimmage is the point of origin of the fumble.

3. Team A attempts to punt the ball on third down. The kick is blocked and the ball goes dead in A’s possession in their own goal. Team B have the option to take the ball at the Point of Last Scrimmage.

4. On a convert attempt, Team A has 13 men on the field, the convert is wide and the ball goes out of bounds. Team B may have the penalty applied on the kickoff.

6. Team A has the ball for a 2nd down and 10 at their 2 yard line, the QB is in goal with the ball and Offensive Player #60 holds a defender in goal who was about to tackle the QB. A safety touch will awarded.

7. Team A has a trick play, they have an end on each side of the field, five ineligible receivers inside and the ball will be snapped by Offensive Player #80 who is just between the end on one side and the tackle on the line of scrimmage. This is a legal play.

8. Team A with 3rd down and 15, punts the ball just across the line of scrimmage. The kicker recovers his own kick and he is tackled immediately. Since Team A did not gain the necessary yardage, it will be Team B’s ball where the ball became dead.

9. Team A punts the ball, while the ball is in the air, Team B is penalized for holding near the line of scrimmage, the 10 yard penalty if accepted will be applied at Point of Last Scrimmage with the down repeated.

10. On a pass play, players from opposing teams are running side by side when the foot of the defensive player inadvertently tripped the offensive player. Team B will be penalised for pass interference, penalty is loss of 10 yards, automatic first down.