Milanovich: ‘In my mindset I’m going to be here’ 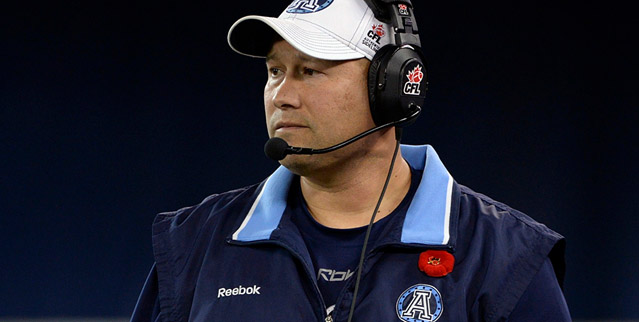 Milanovich: ‘In my mindset I’m going to be here’

Speculation regarding Milanovich’s future has swirled for months amid reports he’d become frustrated with the Argos constantly having to travel to different practice sites before moving into a permanent facility at Downsview Park in September. But on Sunday after Toronto had been eliminated from playoff contention, Milanovich said he intends to return in ’15.

“I don’t expect anything to change,” Milanovich said. “I know Jim (GM Jim Barker) will meet with (Argos president) Chris Rudge, then Jim and I will sit down and speak about their vision for this organization and where I fit in that.

“In my mindset I’m going to be here and if for any reason that changes we’ll address it then.”

Barker said Milanovich’s future isn’t an issue in his mind.

“Scott’s under contract for next year,” Barker said. “Things always happen that you don’t expect but at this point everything is moving forward.

Milanovich admitted he received a lucrative coaching offer following last season but turned it down to remain in Toronto.

“Jim and I are focused on the same things and see eye-to-eye on the most important things of how to build a champion and when you have that, you have a shot. Obviously we’re much more settled now with the new facility and practice situation. All those things can be very important and we’re in a much better place than we were four months ago.”

Milanovich said Toronto’s nomadic existence was no more challenging this year than it was his previous two but that it drew more focus this season because of the mounting losses.

“I won’t sit here and tell you it’s not a factor,” he said. “It costs you time in the week that you could be preparing your team but we proved the two prior years it can be overcome.

“We just weren’t able to do that this year.”

Milanovich has completed a 28-26 record over three seasons with Toronto. He was the CFL’s coach of the year in ’12 after Toronto won the 100th Grey Cup game, then led the Argos to first in the East Division with an 11-7 record before losing to Hamilton in the conference final.

Change was the operative word for Toronto this season.

Despite losing eight of its first 11 games, Toronto (8-10), controlled its playoff destiny until dropping a 17-14 road decision to Montreal on Nov. 2. Even with Ray (concussion) out, the Argos beat Ottawa 23-5 at Rogers Centre on Friday night but were eliminated from post-season contention Saturday night when Hamilton defeated the Alouettes 29-15 to clinch first in the East.

Montreal (9-9) was relegated to second and will face B.C. (9-9) in the Eastern semifinal Sunday. The Lions were fourth in the West but claimed the third Eastern playoff seed after posting a better record than Toronto.

“We’re not a perfect team but I believe if we played our ‘A’ game we could beat anybody,” Milanovich said. “It was torture watching (Saturday night) and not having any control over it.

“But that’s what we deserved based on the season we had. For the most part you get what you deserve and that’s why we’re on the outside right now looking in.”

There were bright spots.

Ray made 17 starts this season and finished as the CFL leader in passing yards (4,595) and TDs (28). Despite missing seven games to injury, Owens finished fourth overall in receiving with 86 catches for 989 yards and seven TDs.

But Ray also had 15 interceptions, which he says were often the result of poor decisions on his part. And an Argos defence that allowed 30 TD passes and 45 touchdowns overall — both league highs — also didn’t appear to have a bona fide leader.

However, Barker shouldered the responsibility for Toronto missing the playoffs.

“The bottom line is as a GM I didn’t provide them with what they needed to win football games and that’s what has to be better,” he said. “We’re at the stage of analysing why that happened and making sure it doesn’t happen again.”

Ray also admitted he was bothered by right shoulder issues all season that affected his arm strength. Ray hurt the joint last season and said off-season surgery to fix the problem was possible.

“I’m going to have my shoulder looked at again,” he said. “It definitely wasn’t where I’d like it to be at and will explore some options.”

For Owens, missing the playoffs is a bitter pill to swallow just two years after celebrating a Grey Cup win at Rogers Centre. The veteran receiver said Milanovich’s return is crucial to Toronto’s fortunes.

“Scott sets the tone for this whole team,” Owens said. “This year he had to do a whole lot more than just gameplan.

“He had to find different ways to keep us motivated, to keep us believing. The thing he preaches determines wins and losses and I hope the guys understand now that’s what it is. If you don’t turn the ball over and are disciplined, more times than not you’re going to win the game.”

Both Barker and Milanovich agree that a major rebuild isn’t necessary this off-season but Milanovich said changes are necessary.

“I think the buy-in from the guys in the locker-room is important,” Milanovich said. “It wasn’t always where I wanted it to be this year but we’ve weeded some of those guys out and there’s probably a few more that need to go.

“It’s important for me the players in that locker-room believe in what we’re selling and I believe we’re well on our way to that. There’s a few more pieces we’re going to need to have . . . but truth is we’re not far away.”

Barker hasn’t traditionally been overly active in free agency and doesn’t expect to be this winter. He believes Toronto already has the nucleus to be a contender.

“Next year we should be hitting the ground running,” Barker said. “When you’re one of the teams that doesn’t make the playoffs, the chance of coaches getting other jobs probably isn’t going to happen so now we’re going to have some continuity.

“I think this team underwent too much change this year. I believe the teams that are successful in pro sports are the ones that have some kind of stability and as little change as possible.”