Prospects up for grabs in CFL Supplemental Draft 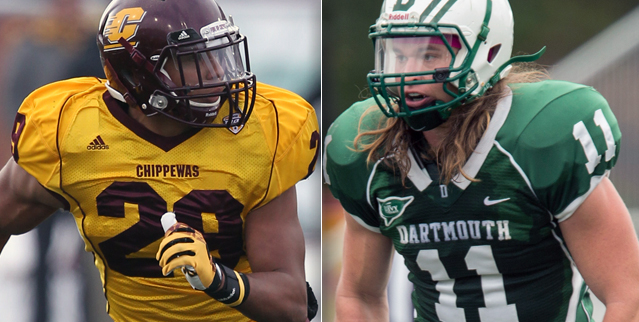 Prospects up for grabs in CFL Supplemental Draft

Defensive backs Garrett Waggoner of Dartmouth and Jarret Chapman of Central Michigan will be up for grabs and available for all nine CFL teams to pick up based on which team forfeits the highest pick in next year’s draft.

This year’s draft is particularly noteworthy, ranked by TSN Draft guru Duane Forde as the best class since 2011 when Alex Ellis, Kito Poblah and Ted Laurent were selected.

The guidelines for the supplemental draft are as follows:

Clubs who wish to participate in the Supplemental Draft will be contacted on an individual basis and will be asked to submit their draft selections by order of waiver priority (each Club will be advised of the preceding Club’s bid). For example, Calgary will start the draft with the chance to offer a seventh round pick in the 2016 CFL Draft and move upwards through waiver priority.

The team willing to forfeit the highest original pick in the 2016 draft will get the player, while the process will repeat for the second player in the draft.

Waggoner, a six-foot-one, 225-pound defensive back will be the first to go in the draft. The Sarasota, Fla. native achieved the distinction of playing in the most games (42) of any Dartmouth football player in history and racked up a full case of awards while at Dartmouth:

• 2013: co-recipient of the John M. Manley ’40 Award “as the player who demonstrated the most improvement through his efforts in the weight room.”

• 2012: recipient of Dartmouth football’s Bob Blackman Award for the player who most contributed to the success of the team.

• 2010: recipient of the Doten Award for making a significant contribution to the success of the team as a sophomore.

Waggoner is a leader both on the field and off. One of three team captains in 2013, he clinched the season’s final game with an interception. Throughout his five-year Dartmouth career he hit hard and he hit often, racking up tackles in every game.

If drafted, he would become a third-generation CFLer – his father was a draft pick of the Hamilton Tiger-Cats, and his grandfather played for the Ticats from 1951 to 1957. Waggoner recently became a Canadian citizen.

Chapman was a stalwart contributor for the Chippewas throughout his involvement in their football program. In 2013 he ranked sixth on the team in tackles (54 total, including 25 solos – up from 51 tackles in 2012) and his four pass break-ups tied him for second on the team.

Both players are expected to be selected in this year’s Supplemental Draft.

National safety Mike Dubuisson was the only player selected in 2014.