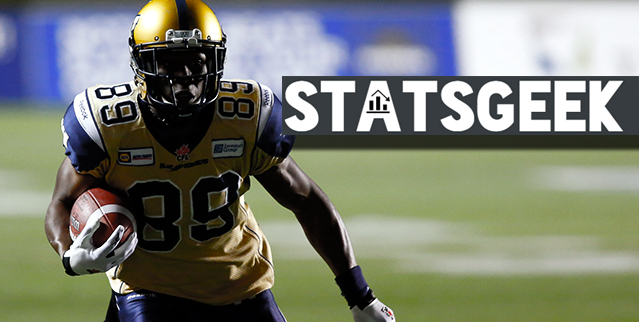 StatsGeek is a new weekly segment on CFL.ca featuring the work of league chief statistician Steve Daniel. It highlights growing trends around the league and much of the same data powering all nine CFL coaching staffs and head offices. Coaches and General Managers use Steve’s analysis on a daily basis to guide important front office and on-field decisions – analysis that frames trends and changes in the game in a purely factual and meaningful way.

The inaugural edition of StatsGeek considers the role statistics and analysis played in the CFL off-season rule changes, from the placing of the extra point attempt to modifying blocking rules on punt returns.

TORONTO – Have you ever wondered what goes into a rule change in professional sports?

If there’s one constant in pro sports, it may be the frequent changing and adapting of rules to make the game better. Whether to improve player safety, the quality of the game or the overall entertainment value, changing the rules is a common exercise across all sports.

Nothing changed basketball more than the implementation of a 24-second shot clock at the start of the 1954 NBA season, but 24 wasn’t merely an arbitrary number: It was carefully calculated based on the average number of shots taken each game.

Rule changes in pro sports may not always be an exact science such as with the shot clock (although some are, as you’ll soon find out), but they don’t leave much to chance. In short, rule changes are about more than just trial and error.

“What I think often happens during the process of Rules Committee is that someone brings an idea or an opinion in that isn’t necessarily based on fact – it’s a perception of a certain thing happening so many times,” said Glen Johnson, Vice-President of Officiating. “They’ll say things happen ‘a lot’.”

“What Steve does is he finds that out for us – he gets us the facts.”

The CFL’s Rules Committee made several rule changes this off-season including ones that’ll impact four key areas of the game: 1) Pace of play; 2) Punt returns and return coverage; 3) Illegal contact; and 4) The convert

Just like how the NBA implemented the shot clock, these rule changes were fueled by either black and white stats or opinion based on hard facts – and most importantly no guesswork. That’s where Steve Daniel, long-time CFL head statistician, plays a vital role.