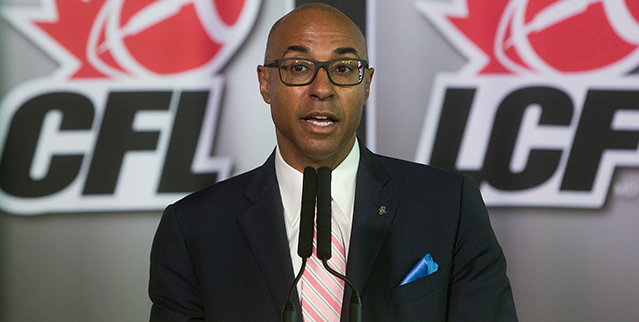 The policy was developed in partnership with the Ending Violence Association of Canada and following consultations with multiple women who are experts in the field of responding to violence against women. These experts work regularly with CFL teams to deliver outreach and public education programs.

“We will work to ensure all of our workplaces are safe from violence against women, and that the attitudes that allow violence to occur are not tolerated,” Orridge said.

“In the face of a report of violence against a woman perpetrated by any CFL employee, we will always take it seriously. Doing nothing will never be an option.”

• The policy applies to everyone who works for the CFL – not just players, but coaches, officials, executives and staff.

• Everyone in the CFL will receive mandatory training on violence against women and the issues surrounding it on an annual basis.

• The CFL will support, endorse and participate in efforts to increase awareness of violence against women and ways to prevent it throughout society, and in particular among Canadian youth.

• When any CFL workplace, including a CFL football club or one of its corporate offices, receives a report of violence against women involving a CFL employee, we will act.

• We will assess the situation and future risk to the women in question, and engage when necessary local experts who will make up violence against women response teams (VAWR teams). These VAWR teams will be made up of social workers and other professionals with extensive experience in dealing with violence against women.

• These VAWR teams will provide the best possible support and referrals to the women affected, ensure counselling is provided where it is deemed helpful to the men involved, and will strive to act always in the best interests of any children involved.

• We will always err on the side of safety, respect for the sanctity of human life, and every person’s inherent right to security from harm.

• We will not act as criminal investigators, fact finders, judges or juries: our focus is on providing access to experts who can intervene in a situation, assess the risk to the woman, mitigate any harm in the best way possible, seek behaviour change on the part of perpetrators and contribute to positive outcomes for individuals, families and communities.

• In cases where there are clear and documented cases of violence against women – determined by the police, the courts, or confirmed by the perpetrator – the CFL will impose sanctions.

• The CFL will also impose sanctions when there has been a clear violation of protection orders or other directives put in place by the courts or police, as such violations are clear indications of higher risks of violence.

• These sanctions will range from suspension for single or multiple games to a lifetime ban from the CFL, depending on the severity and number of incidences.

• In determining sanctions, the Commissioner will consult a list of offences, including sexual assault, domestic violence, and violation of protection orders or other directives provided by the courts or police, as well as guidelines prepared in consultation with experts on violence against women.

• These sanctions will be subject to the provisions and processes of the league’s collective bargaining agreement with the CFL Players Association, and in the case of other employees, their employment agreements and employment law.

“The leadership being shown today by the entire CFL is to be applauded profoundly,” said Tracy Porteous, the Chair of Ending Violence Association of Canada.

“Violence against women has long thrived in the shadows so when organizations, especially those led by men, step forward to ask, ‘what can we do to break the silence?’ it shines an important light on a subject most people don’t know what to do with. Through this policy the CFL is changing history.”

The policy announcement followed news that the BC government is renewing funding for Be More Than a Bystander, the very successful anti-violence against women program that is a partnership between the CFL’s BC Lions and EVA BC.

Be More Than a Bystander is just one of the many such programs led by several CFL teams who are working in their communities to raise awareness of violence against women.

“Our players are truly leaders when it comes to generating awareness on this very important issue,” said Scott Flory, President of the CFL Players Association. “Several of our players, on a league wide basis, are out in the community changing mindsets about violence of all kinds, especially violence against women. They are reaching out to all ages and demographics with special attention paid to youth in schools.”

Domestic and sexual violence most often take place out of the public eye and are deemed the most underreported of all violent crimes in Canada. The main intent of the policy, in all circumstances where abuse or violence has been alleged, is to assess the risk, reduce or eliminate that risk, mitigate harm and promote positive change.

“In talking with women’s groups, we were struck by the fact that they put the emphasis on protection and support for a woman at risk, and supporting behaviour change on the part of perpetrators, while others can tend to measure a policy purely by how tough or punitive it is,” Orridge said.

“For example, the women we worked with on the policy spoke to us more about whether a woman’s life could be at risk, than whether her spouse was going to be punished. In fact, some said that removing an employee’s ability to make a living could affect his ability to provide child support, which would negatively affect his former partner and their kids.”

Under the policy, sanctions that involve suspensions and loss of income will only be an option if or when allegations are substantiated and the safety of a victim and/or community members has been compromised.

But whether there is ‘proof’ of an allegation or not, no report will be ignored. Every situation will be assessed, with experts called in when necessary, and help will always be offered.

With the policy now endorsed by the CFL Board of Governors, the league’s teams will work with the league office and the Ending Violence Association of Canada to identify the right regional experts to provide training, assessment and counselling services.

“Any policy evolves with time, and this one will. But this represents an important step forward for the CFL,” Orridge said.