Walk-ing on Sunshine: Esks officially best in the West 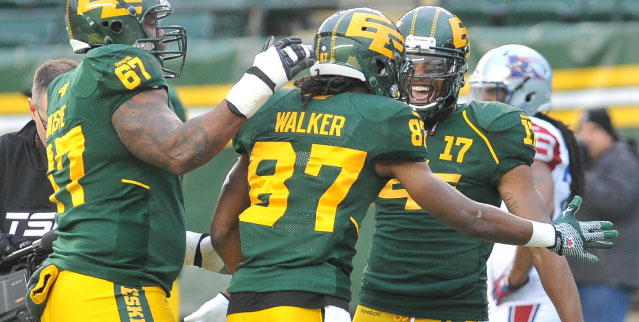 Walk-ing on Sunshine: Esks officially best in the West

EDMONTON — Derel Walker was a force, hauling in three touchdown passes from QB Mike Reilly, as the Eskimos secured top spot in the West Division with a 40-22 win over the Montreal Alouettes.

With the win, the Esks earned a bye into the Western Final for the first time since 2003, and will play the winner of the Western Semi-Final between the BC Lions and Calgary Stampeders.

The Alouettes, meanwhile, will not be making their annual appearance in the Grey Cup Playoffs, missing the post-season for the first time since returning to the CFL in 1996.

Reilly was stellar for the Esks, completing 28 of his 34 passes for 309 yards and a trio of TD strikes. Walker, meanwhile, racked up 128 yards on 10 catches to go along with his hat-trick.

About two hours prior to opening kickoff, the Alouettes announced that head coach and GM Jim Popp did not make the trip to Edmonton due to an illness.

He was replaced on the sidelines by defensive coordinator Noel Thorpe.

Thorpe is the mastermind behind a stingy Alouettes defence that has allowed a mere 20.8 points per game this season. His unit has even had success against a potent Eskimos offence this season, allowing just 15 points in a losing effort earlier this season.

However, things have changed since Week 8, as the Green and Gold entered Week 19 riding a seven-game win streak, featuring an offence that is red hot.

The first quarter saw the powerful Edmonton offence go to work on the Als, scoring a combined 10 points in their first two drives, led by their QB Mike Reilly.

One drive after former Alouettes kicker Sean Whyte gave the Esks a 3-0 lead thanks to a 32-yard field goal, Reilly guided the Eskimos on a 9-play, 71 yard drive that was culminated by a six-yard TD strike to Derel Walker.

Walker was a force in the opening quarter, hauling in five grabs for 57 yards in addition to the score.

But the Alouettes would respond quickly at the start of the second frame. Kevin Glenn, who was making his third start as Montreal’s starting QB, orchestrated an impressive eight-play, 51-yard drive that saw receiver B.J. Cunningham haul in his second TD of the season.

On the drive, Glenn was good on three of his four passes, while tailback Tyrell Sutton ran the ball three times for a combined gain of 32 yards.

Glenn’s first half success would continue into the late stages of the first half.

After fumbling the ball away a drive earlier, the wily veteran and the Montreal offence proceeded to pound the ball directly at the Eskimos, with Sutton and fellow RB Brandon Rutley combining for 53 yards on five-straight rushing plays.

Glenn then capped off the drive by finding former Eskimo Fred Stamps with a 37-yard dart for a touchdown. The score was Stamps’ fifth in his last six games.

Prior to the conclusion of the first half, Whyte would cut Montreal’s lead to one with a 37-yard field goal.

Once the third quarter got underway, a mistake by Glenn would give the Eskimos an opportunity to reclaim the lead. On his first pass of the half, Glenn saw his pass picked off in the flat by second-year linebacker Dexter McCoil.

The turnover allowed the Esks to take over inside Montreal’s 20-yard line. Fortunately for Glenn and the Als, the Esks weren’t able to find the endzone, instead settling for a 21-yard field goal by Whyte, giving the home side a 16-14 lead in the process. The Als had a chance to jump back in front again, but kicker Boris Bede missed on a 48-yard attempt. The Esks kept the ball in the endzone, giving the Als a point.

With just over six minutes to go in the third quarter, Alouettes defensive end Michael Klassen was taken off the field on a stretcher with an undisclosed injury. The injury caused a 15-minute delay in game action. Once the two teams were able to resume play again, the Eskimos would increase their lead to four thanks to a 32-yard field goal by Whyte, his fourth of the game.

On Montreal’s ensuing drive, the Alouettes’ offensive unit would once again put together a nice mix of passing and rushing plays that would result in six points. Two plays after Sutton romped for 28 yards, Glenn hooked up with Cunningham once again, this time for a 30-yard score to give the Als a 22-19 lead.

The back-and-forth action continued on Edmonton’s next drive, with Reilly leading his offence on a seven play, 77-yard drive that saw Walker score his second touchdown of the game, giving the Esks 26-22 fourth-quarter lead.

Then, with 9:20 to go in the fourth frame, Reilly and Walker would hook up yet again, this time from 28 yards out. Walker’s third score of the game capped off an six-play, 75-yard drive to give the Esks an 11-point lead.

With 5:37 to go in the game, it looked as though the Alouettes had scored to bring themselves within five of Edmonton’s lead. However, backup QB Tanner Marsh fumbled the ball just as he was crossing the goal line, allowing the Eskimos to recover the loose ball in the endzone.

That would be the closest the Als would come to scoring any more points for the remainder of the game.

Chad Simpson would tack on a final touchdown for good measure with less than a minute to go, giving the Esks a 40-22 win.

Next week, the Als will close out their season at home against the Roughriders, while the Eskimos will enjoy their well deserved second bye of the year.