Bridge airs it out in first career start under centre 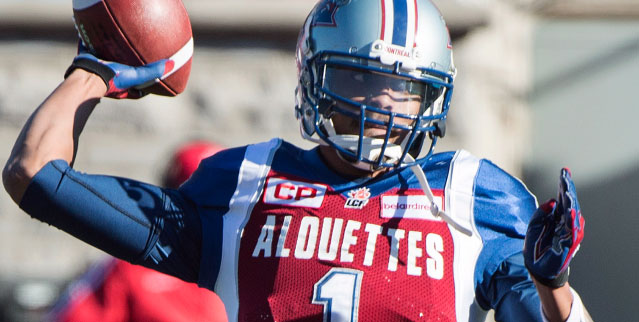 Bridge airs it out in first career start under centre

MONTREAL – Patience has paid off for Montreal quarterback Brandon Bridge. The Alouettes backup pivot, who saw action in Week 1 had to wait 17 more games before taking meaningful snaps under centre.

Bridge became the first Canadian-born quarterback to start a regular season game in the CFL since 1996 and did not disappoint, going a strong 21 of 30 for 222 yards and posting a pair of touchdowns.

Many, including himself, thought that Bridge’s opportunity would come sooner especially given the uncertainty at quarterback up until the Als acquired Kevin Glenn less than a month ago.

“After the first game I was really waiting for my opportunity and it was taking so long”, Bridge told reporters following the Week 20 contest. “I was happy for the experience and proud of it.”

A pesky Riders squad ended up taking the game and even though the contest was of little consequence in the standings, Bridge was visibly bothered by his inability to lead Montreal to a win heading into the off-season.

“It felt good (to start) but quarterbacks are judged off wins and it doesn’t matter what you do (statistically) so I wish I could have finished the job”, he said.

Here is a look at Bridge’s two touchdown tosses: