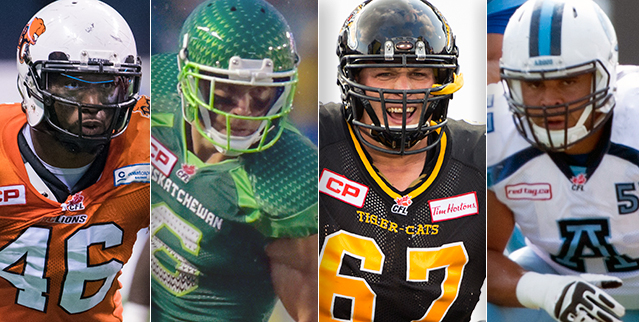 TORONTO (November 19, 2015) –The Canadian Football League (CFL) announced today all nine nominees for the 2015 Jake Gaudaur Veterans’ Award, given annually to the CFL player who best demonstrates the attributes of Canada’s veterans: strength, perseverance, courage, comradeship and contribution to their community.

“Sport has the remarkable capacity to be an agent for positive social change in each of our communities,” stated Jeffrey L. Orridge, CFL Commissioner. “The nine men nominated this year for the Jake Gaudaur Veterans’ Award exemplify the very best of what our league is made of. Congratulations to each player on this distinguished recognition, and thank you for the work you continue to do in your respective communities.”

The 2015 Jake Gaudaur nominees are:

Each of the players nominated this year have incredibly compelling stories, and have been selected by their respective teams for being exemplary teammates who have overcome both professional and personal challenges. They have also been deemed to demonstrate leadership on and off the field, and are active members of their communities by donating and volunteering their name and time to different social causes and campaigns.

“A long and rich history connects the Canadian Armed Forces and the Canadian Football League,” said The Honourable Kent Hehr, Minister of Veterans Affairs and Associate Minister of National Defence. “Many Veterans and serving members, including Jake Gaudaur, have brought their leadership and dedication to this well-loved sport. It’s heartening to see this shared passion live on, as these players strive to honour his example.”

The 2015 recipient of the Jake Gaudaur Veterans Award will be handed out by a representative of Veterans’ Affairs Canada on Thursday November 26th at the Shaw CFL Awards in Winnipeg during Grey Cup Week.