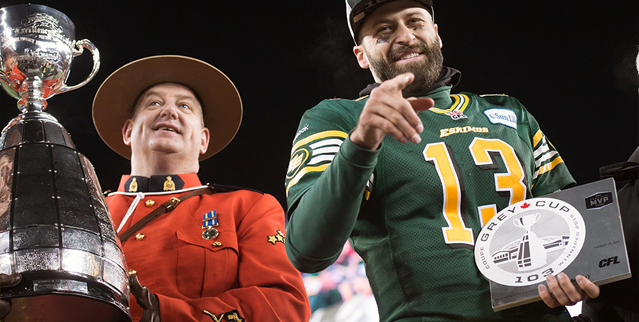 WINNIPEG — Mike Reilly was named the Shaw Most Valuable Player on Sunday night, after leading the Eskimos to a 26-20 win over Ottawa in the 103rd Grey Cup presented by Shaw.

Reilly threw for 269 yards and a pair of touchdowns on 21-of-35 passing, while in the fourth quarter he led the go-ahead touchdown drive to give Edmonton its first Grey Cup win since 2005.

The honour is a feather in the cap for the 30-year-old pivot, who returned from a knee injury after Labour Day to lead the Green and Gold to 10 consecutive victories.

Reilly’s QB rating of 103.2 marked the fifth straight game over 100, while he did not throw an interception against the CFL’s second-ranked defence.