Prospects put on the pads in final Combine showcase 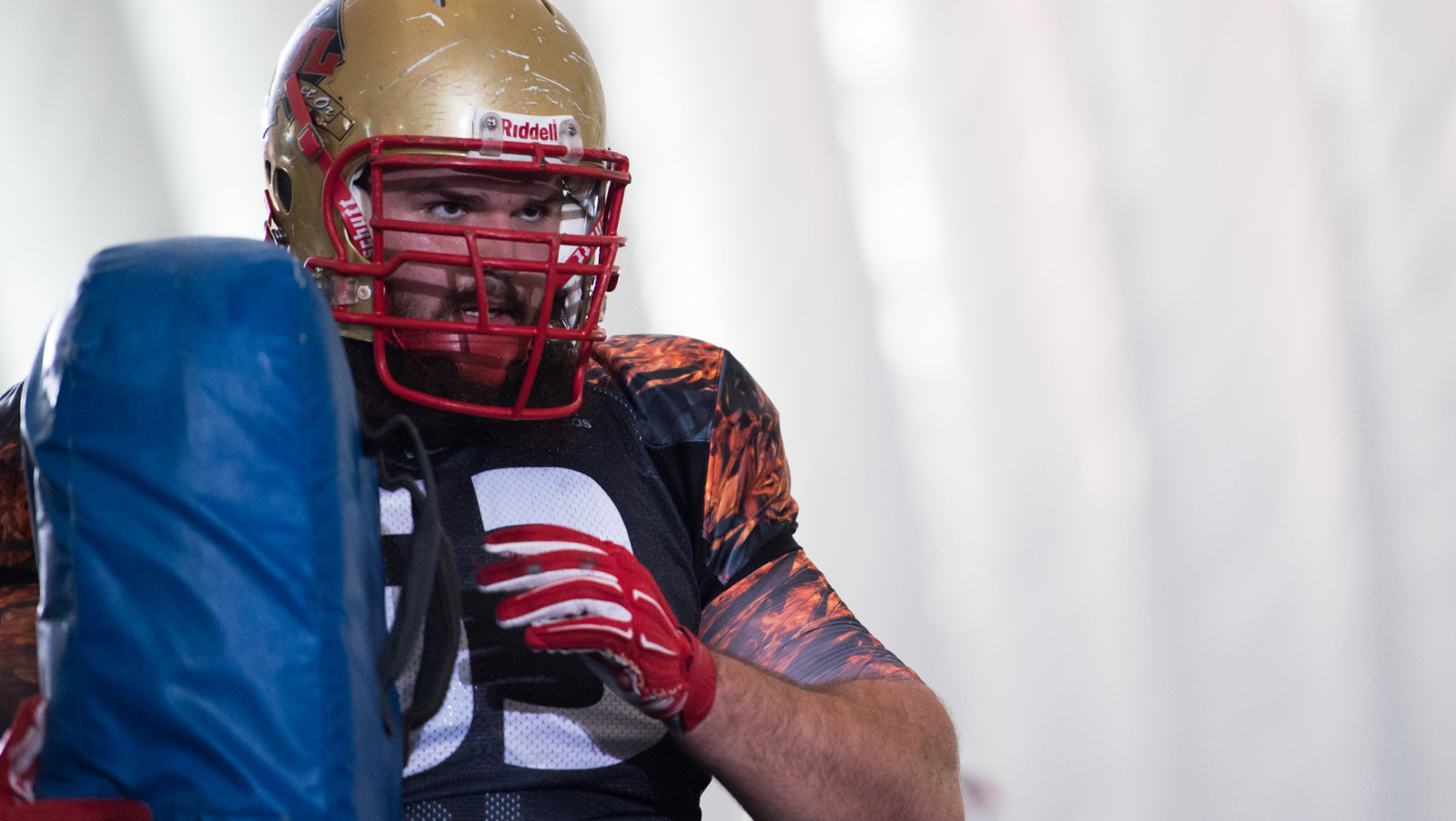 Prospects put on the pads in final Combine showcase

TORONTO — The busiest day of the CFL Combine came and went on Sunday, providing plenty of answers for the country’s top football prospects less than two months out from the CFL Draft.

Queen’s receiver Doug Corby led all receivers with a 4.505 time in the 40-yard dash, boosting his draft stock by running the fastest and taking one of the combine’s most prestigious events.

Laval pass-catcher Felix Faubert-Lussier continued what’s been a strong weekend for him, showing after an impressive performance on Saturday that his muscles aren’t all he known for. His time of 6.73 in the three-cone drill was head and shoulders above the rest, adding that to a top-five finish in both the shuttle and the 40.

Four out of the combine’s six major tests kicked off early Sunday morning and lasted into the afternoon, as evaluators got one final glimpse of the league’s future at University of Toronto’s Varsity Stadium.

Drills and one-on-ones put players in pads, giving onlookers a chance to see up close just what prospects are capable of. The day was one more chance to make a positive lasting impression before potentially being selected by one of nine CFL teams.

While Faubert-Lussier continued to show his versatility as an offensive weapon, the CFL Scouting Bureau’s 18th-ranked player Brian Jones was also strong across virtually every test on Sunday as well as in the drills. CFL.ca Combine Insider Justin Dunk said afterwards no one raised his stock more than Jones did.

“Jones backed up his Saturday performance with an impressive Sunday,” said Dunk.

Jones ranked third in the three-cone and shuttle while placing fourth in the broad jump. The only Sunday event he didn’t place top-five in was the 40, but Dunk said Jones still showed enough in the fastest man competition.

Toronto native Llevi Noel atoned for what he called a disappointing Saturday, ranking near the top of the field on Sunday with a jump of 10’9.5″ in the broad jump. But in the end it was Corby with his 40 time and Jones and Faubert-Lussier with their overall athleticism that made the biggest waves to close out the combine.

All in all it was a day of ups and downs at the CFL Combine, as some players improved their draft stock while others underwhelmed. 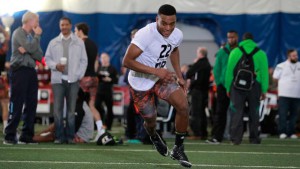 Just like the bench press on Saturday, the 40-yard dash is the main event Sunday as prospects put their speed on display. It’s important for all types of players but especially those at skill positions like running back, receiver or defensive back.

No one took more advantage on Sunday than Corby, who didn’t blaze through the 40 but was the fastest person on the field — a significant accomplishment for the Scouting Bureau’s fifth-rated receiver. Corby came into the combine ranked behind two others participating in the weekend’s events in Jones and Noel, but likely helped his draft stock thanks to his 40.

Barely behind Corby was Calgary’s Brett Blaszko, who importantly showed he has the speed to complement his 6-foot-4, 204-pound frame. Blaszko was not rated inside the top-20 but answered some major questions with both his testing and his football drills.

“Blaszko had questions about how seriously he would take football, and he came into the combine and showed that he worked hard and was prepared for the entire weekend,” said Dunk. “He stood out because of his speed and size, and he’s got the frame that should allow him to add more weight.”

While Faubert-Lussier rounds out the top-five in the 40, Southern receiver Mike Jones and Western receiver Shaquille Johnson both disappointed in the 40-yard speed test. Jones was considered the favourite to win the event coming in but ran a 4.606, while Johnson didn’t live up to expectations after falling to come close to matching Thursday’s electrifying 4.39. 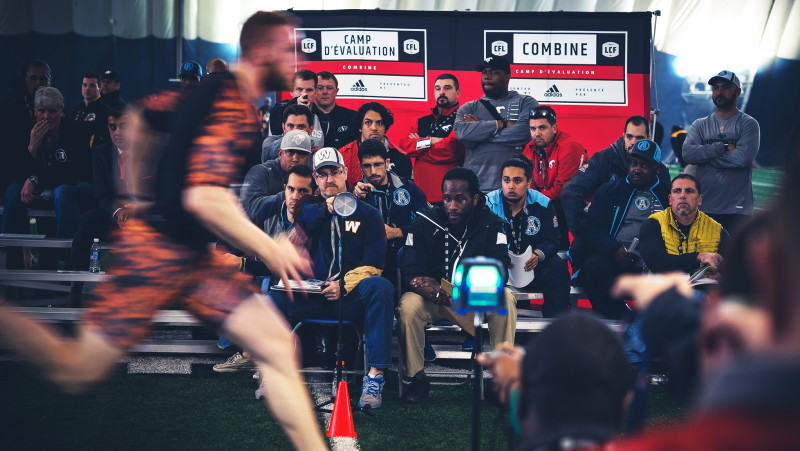 Calgary running back Mercer Timmis, ranked seventh overall in the Scouting Bureau, was also disappointed with his 40-yard time after running a 4.703 — but Dunk said he made up for it when he put the pads on.

“Mercer Timmis was admittedly disappointed in his 40 time,” said Dunk “That said, when he put the pads on he looked like a natural running back.

“Other players really took advantage of the opportunity to shine at the combine, and Timmis held steady – but other players that stood out might have jumped ahead of him on draft boards.”

Yes, the 40-yard dash can do a lot to alter a player’s stock, especially at the combine where all nine teams and their personnel are on hand to see a player run in person, often for the first time.

“To see kids in person where they can run so we can actually see them run, we know how fast they are, how tall they are and how much they weigh for sure,” said Argos defensive coordinator Rich Stubler.

“Those are big, and then the film. This is invaluable for us.” 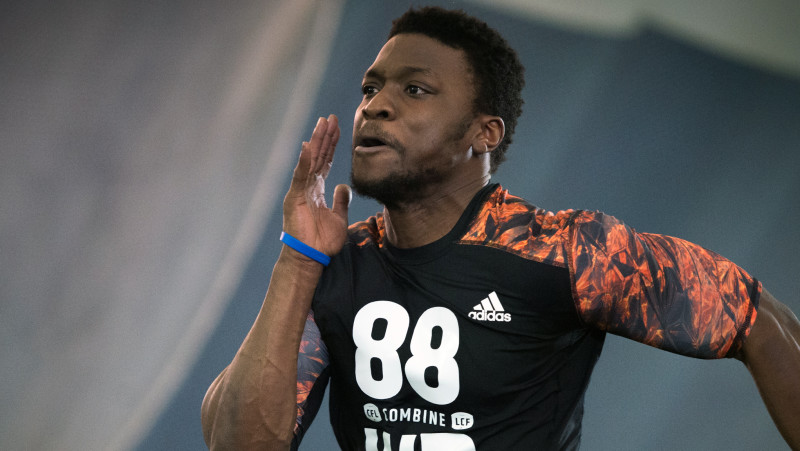 While Shaquille Johnson’s 40 left plenty to be desired, the late invite was again the top tester in the broad jump on Sunday. He couldn’t match his 11-foot jump on Thursday at the Toronto Regional Combine, but still used this weekend to show that he’s one of the most athletic players going into the CFL Draft.

Llevi Noel, Brian Jones, Nicholas Termansen and Mikael Charland round out the top-five in the broad jump, a test of overall burst and explosiveness. 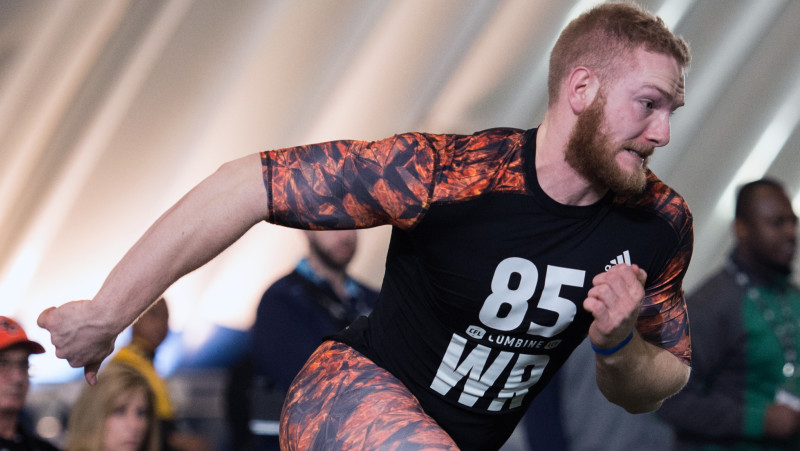 Receiver Brian Jones was Dunk’s biggest star at the combine on Sunday and the short shuttle was one example why. The lengthy Acadia receiver led all participants with a 4.13, showing quickness, acceleration and mobility while ranking third overall on the week.

Regional Combine invites Maiko Zepeda and Nicholas Termansen stayed at the top of the board with runs of four seconds flat, which hold up from earlier in the week at regional combines. 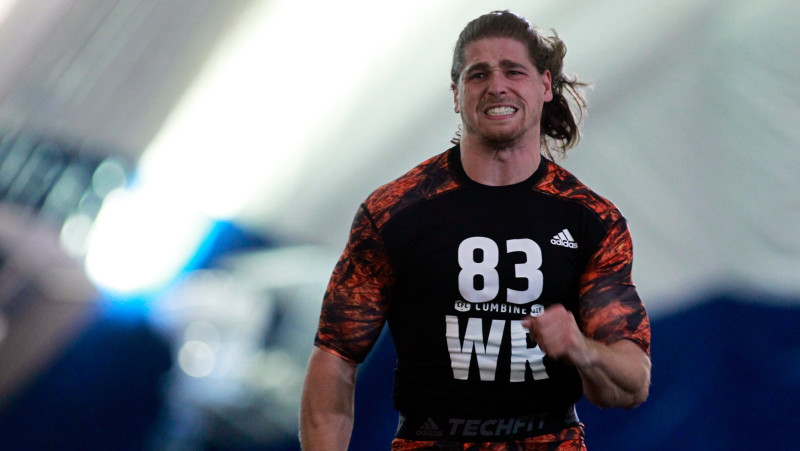 Faubert-Lussier showed his versatility over the weekend, testing well in every area (Pawel Dwulit/CFL.ca)

Felix Faubert-Lussier showed this week he has few if any weaknesses, and capping off his testing with a 6.73 in the three-cone showed just how well-rounded an athlete he is. The physical Laval receiver was all by himself as the day’s top tester in that event, proving his versatility as a player that could fit multiple roles on offence.

Mikael Charland, Taylor Loffler, Brian Jones and Maiko Zepeda round out the top five, all finishing with times below seven seconds.

The lasting impression of the one-on-one 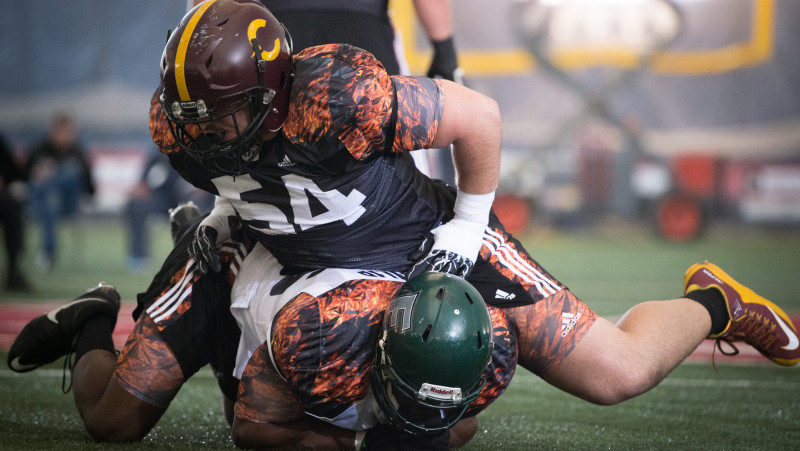 There are just some things testing can’t solve.

While four different tests provided teams with plenty of measurables on the team’s top prospects, the one-on-ones give evaluators a chance to see prospects on the field in action. They also give prospects one last chance in the spotlight to make a lasting impression before the CFL Draft.

One player who did well in the testing but only cemented a strong Sunday was Brian Jones, whose stock according to Dunk is rising fast.

“In the football drills, Jones caught the ball very well and showcased his physicality,” said Dunk. “In fact, there wasn’t a DB that could stand up to him on this day.

“Despite a hulking 6-foot-4, 233-pound frame, he ran routes as smooth as any of the smaller, speedy pass-catchers.”

“There wasn’t a DB that could stand up to him on this day.”

Another player who helped himself on Sunday was Rupert Butcher, an interior defensive lineman who Dunk said needed to show this weekend that he could be a pass-rusher after spending most of his University career playing one-technique.

“He certainly did that today,” said Dunk. “At Western University he took on a lot of double teams to free up other defenders to make plays. That’s why his ability to pressure the quarterback had been questioned.”

Butcher was unstoppable in one-on-ones, winning virtually every one-on-one battle. Just as important as the result, Butcher said afterwards, was the way in which he approached one-on-ones.

“I think the film the coaches saw of me on defence did not have a lot of pass rush,” he added. “Here you have the best O-linemen in the country, and I showed I could play with them and beat them.

“I was really happy with my performance today.”

For others, one-on-ones provide an opportunity for redemption when testing doesn’t go according to plan. Charles Vaillancourt is one of three highly-touted, top-20-ranked Laval offensive linemen looking to go high in May’s draft, and after a disappointing Saturday he felt good about his on-field work.

“I was a little bit disappointed with my bench press yesterday, but today I think I showed everybody that I’m still a very strong guy,” said Vaillancourt, a right guard.

“I’m here for a reason and all the scouts that wanted to see me, I think they got a really good chance to do that today.”

Ninth-ranked UBC prospect Taylor Loffler was also among those who turned heads Sunday, ranking third in the three-cone drill (6.91) and fifth in the shuttle (4.19). Then he showed even more athleticism on the field.

“Loffler showed more than enough speed to prove he can be an every-down safety in the CFL,” Dunk said of last November’s Vanier Cup winner. “He had the day’s highlight-reel play when he jumped in front of a pass, showing his athleticism as he picked off the pass.

“He showed that he could quickly make up ground and close in on the ball while it was in flight.”

Linebacker Doug Parrish, receiver Brett Blaszko and Simon Fraser offensive lineman Michael Couture are also among those who seemingly raised their stocks on Sunday, as putting the pads on allowed players to show instincts that just can’t be seen in regular testing.

On-field drills and one-on-one battles saw many players raise their stock on Sunday and leave the perfect mark on a long weekend of testing for the CFL’s top prospects.

All that’s left now is the long two-month wait as the CFL Draft is on everyone’s radar.